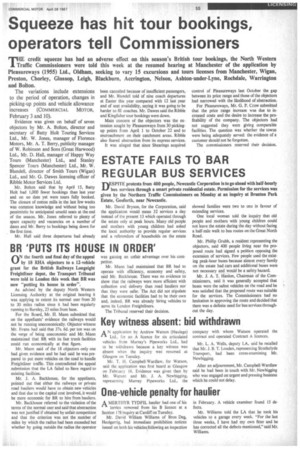 AN application by Andrew Watson (Haulage) Ltd.. for an A licence for six articulated vehicles from Murray's Pipeworks Ltd., had to be withdrawn because a key witness was absent when the inquiry was resumed at Glasgow on Tuesday.

Mr. T. H. Campbell-Wardlaw, for Watson, said the application was first heard at Glasgow on February' 16. Evidence was given then by Mr. Watson and Mr. J. A. Newbigging, representing Murray Pipewor14.s Ltd., the

company with whom Watson operated the contract and operated Contract A licences.

After an adjournment, Mr. Campbell-Wardlaw said he had been in touch with Mr. Newbigging who was engaged on urgent and pressing business which he could not delay.