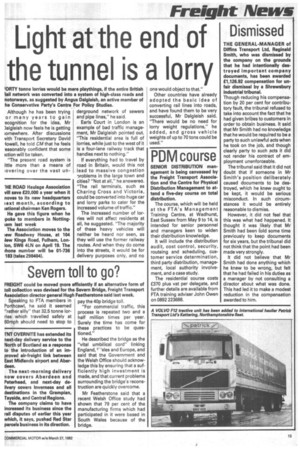 THE GENERAL-MANAGER of Diffins Transport Ltd, Reginald Smith, who was dismissed by the company on the grounds that he had intentionally destroyed important company documents, has been awarded £1,126.92 compensation for unfair dismissal by a Shrewsbury Industrial tribunal.

Though reducing his compensation by 20 per cent for contributory fault, the tribunal refused to take into account the fact that he had given bribes to customers in order to obtain business. It said that Mr Smith had no knowledge that he would be required to be a party to such unlawful acts when he took on the job, and though clearly party to such acts it did not render his contract of employment unenforceable.

The tribunal said that it did not doubt that if someone in Mr Smith's position deliberatelycaused documents to be destroyed, which he knew ought to be kept, it would be serious misconduct. In such circumstances it would be entirely reasonable to dismiss.

However, it did not feel that this was what had happened. It thought it was likely that Mr Smith had been told some time previously to keep documents for six years, but the tribunal did not think that the point had been made very strongly.

It did not believe that Mr Smith had done anything which he knew to be wrong, but felt that he had failed in his duties as a manager by not consulting a director about what was done. This had led it to make a modest reduction in the compensation awarded to him.