Houses get in the way 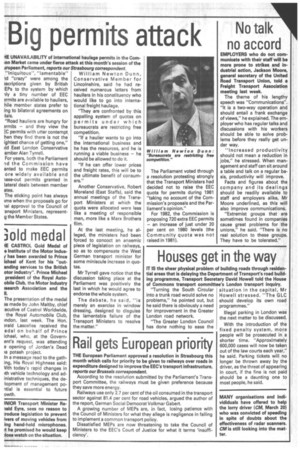 Page 5, 27th March 1982 — Houses get in the way
Close
Noticed an error?
If you've noticed an error in this article please click here to report it so we can fix it.
Keywords : Parking, Road Transport, Criminal Law, Punishments, Traffic Law, Traffic Ticket, Parking Violation, Law / Crime

IT IS the sheer physical problem of building roads through residential areas that is delaying the Department of Transport's road building programme, Transport Secretary David Howell told the House of Commons transport committee's London transport inquiry.

"The Greater London Council has done nothing to ease the should develop its own road programmes."

Illegal parking in London was the next matter to be discussed.

With the introduction of the fixed penalty system, more people will be prosecuted in a shorter time. "Approximately 600,000 cases will now be taken out of the law courts each year," he said. Parking tickets will no longer be thrown away by the driver, as the threat of appearing in court, if the fine is not paid should be a daunting one to most people, he said.