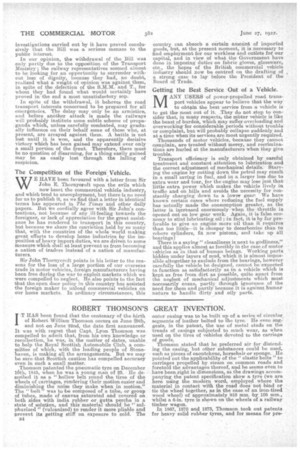 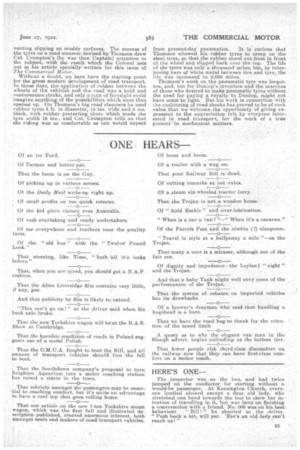 i,T HAS been found that the centenary of the birth of Robert William Thomson occurs on June Mth, and not on June 2nd, the date first announced. It was with regret that Capt. Lyon Thomson was

compelled tothat, from his own knowledge or recollection,he was, in, the matter of dates, unable to help the Royal Scottish Automobile Club, a committee of which, with the leading people of Stonehaven, is making all the arrangements. But we may be sure that Scottish caution has compelled accuracy even in such a small matter.

Thomson patented the pneumatic tyre on December loth, 1845, when he was a young man of 23. He described it as a " hollow belt round the tires of the wheels of carriages, rendering their motion easier and diminishing the noise they make when in motion." The "belt" was to be composed of a tube, or group of tubes, made of canvas saturated and covered on both sides with india rubber or gutts, percha in a state of solution, and this material should be " sulphurized " (vulcanized) to render it more pliable and prevent its getting stiff on exposure to cold. The

outer casing WaS to be built up of a aeries of circular, segments of leather bolted to the tyre. He even suggests, in the patent, the use of metal studs on the treads of casings subjected to much wear, as when used on the tires of vehicles devoted to the carriage of goods. Thomsen stated that he preferred air for distending the casing, but other substances could be used, such as pieces of caoutchoue, horsehair or sponge. He pointed out the applicability of the " elastic belts "to carriages propelled by steam on common roads and. foretold the advantages thereof, and he seems even to have been right in diinensions, as the drawings accompanying the patent specification show a tyre (we are here using the modern word, employed where the material in contact with the road does not bind or tie the wheel together, as in the case of an iron-tired wood wheel) of approximately 910 mm. by 105 ram., whilst a 6-in. tyre is sh9wn on the wheels of a railway timber wagon. In 1867, 1870 and 1873, Thomson took out patents for heavy solid rubber tyres, and for means for pre venting slipping on muddy surfaces. The success of the tyres on a road steamer devised by Thomson drew Col. Crompton's (he was then Captain) attention to the subject, with the result which the Colonel sets out in his article specially/ written for this issue of The Conimercial Motor.

Without a doubt, we here have the starting point for the great modern development of road transport. In those days, the application of rubber between the wheels of the vehiclesand the road was a bold. and venturesome stroke, and only a man of foresight could imagine anything of the possibilities which were thus opened up. On Thomson's big road steamers he used rubber tyres 6 ft. in diameter, 15 ins, wide and 5 ins. thick, with rubber protecting shoes which made the tyre width 19 ins., and Col. Crompton tells us that the riding was as comfortable as one would expect from present-day pneumatics. It is curious that Thomson allowed his rubber tyres to creep on the steel tires, so that the rubber stood out from in front of the wheel and slipped back over the top. The life of the tyres was only a thousand miles, but, by interposing bars af white metal between tire and tyre, the life was increased to 9,000 miles.

Thomson's work on the pneumatic tyre was forgotten, and, but for Dunlop's invention and the searches of those who desired to make pneumatic tyres without the need for paying a royalty to Dunlop, might not have -come to light. But his work in connection with the cushioning of road shocks has proved to be of such value that we welcome the opportunity of giving expression to the appreciation felt by everyone interested in road transport, for the work of a true pioneer 'in mechanical matters.