Volunteer now to save derv... 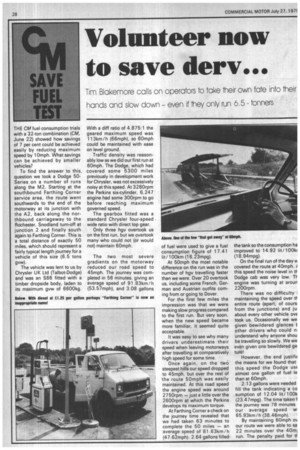 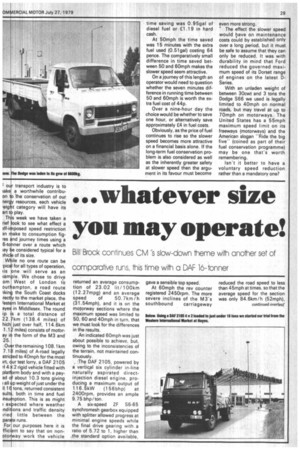 Tim Blakemore calls on operators to take eir own fate into their hands and slow down even if they only run 6,5 tonners

THE CM fuel-consumption trials with a 32-ton combination (CM, June 22) showed how savings of 7 per cent could be achieved easily by reducing maximum speed by lOmph. What savings can be achieved by smaller vehicles?

To find the answer to this. question we took a Dodge 50Series on a number of runs along the II/12. Starting at the southbound Farthing Corner service area, the route went southwards to the end of the motorway at its junction with the A2, back along the northbound carriageway to the Rochester, Snodland turn-off at junction 2 and finally south again to Farthing Corner. This is a total distance of exactly 50 miles, which should represent a fairly typical length journey for a vehicle of this size (6.5 tons gvw).

The vehicle was lent to us by Chrysler UK Ltd (Talbot-Dodge) and was an S66 fitted with a timber dropside body, laden to its maximum gvw of 6600kg. With a diff ratio of 4.875:1 the geared maximum speed was 113km /h (66mph), so 60mph could be maintained with ease on level ground.

Traffic density was reasonably low as we did our first run at 60mph. The Dodge, which had covered some 5300 miles previously in development work for Chrysler, was not excessively noisy at this speed. At 3280rpm the Perkins six-cylinder, 6.247 engine had some 300rpm to go before reaching maximum governed speed.

Only three hgv overtook us on the first run, but we overtook many who could not (or would not) maintain 60mph.

At 50mph the most notable difference on the run was in the number of hgv travelling faster than we were. Over 20 overtook us, including some French, German and Austrian outfits coming from or going to Dover.

For the first few miles the impression was that we were making slow progress compared to the first run. But very soon, when the new speed became more familiar, it seemed quite acceptable.

It was easy to see why many drivers underestimate their speed when leaving motorways after travelling at comparatively high speed for some time.

Once again, on the two steepest hills our speed dropped to 45mph, but over the rest of the route 50mph was easily maintained. At this road speed the engine speed was around 2750rpm — just a little over the 2600rpm at which the Perkins develops its maximum torque.

On the final run of the day vs. covered the route at 40mph. this speed the noise level in tt Dodge cab was very low. Tt engine was turning at arour! 220Orpm.

There was no difficulty i maintaining the speed over tt entire route (apart, of cours, from the junctions) and ju about every other vehicle ove took us. Occasionally we we given bewildered glances t other drivers who could understand why anyone shou be travelling so slowly. We we even given one bewildered ge ture!

However, the end justifi( the means for we found that this speed the Dodge usf almost one gallon of fuel le than at 60mph.

At 50mph the time saved was 15 minutes with the extra fuel used (0.51gal) costing 64 pence. The comparatively small difference in time saved between 50 and 60mph makes the slower speed seem attractive.

On a journey of this length an operator would need to question whether the seven minutes difference in running time between 50 and 60mph is worth the extra fuel cost of 44p.

Over a nine-hour day the choice would be whether to save one hour, or alternatively save approximately £4 in fuel costs.

Obviously, as the price of fuel continues to rise so the slower speed becomes more attractive on a financial basis alone. If the long-term fuel conservation problem is also considered as well as the inherently greater safety at slower speed then the argument in its favour must become even more strong.

The effect the slower speed would have on maintenance costs could by established only over a long period, but it must be safe to assume that they can only be reduced. It was with durability in mind that Ford reduced the governed maximum speed of its Dorset range of engines on the latest DSeries.

With an unladen weight of between 30cwt and 3 tons the Dodge 566 we used is legally limited to 40mph on normal roads, but may travel at up to 70mph on motorways. The United States has a 55mph maximum speed limit on its freeways (motorways) and the American slogan "Ride the big five" (coined as part of their fuel conservation programme) may be one that's worth remembering.

Isn't it better to have a voluntary speed reduction rather than a mandatory one?