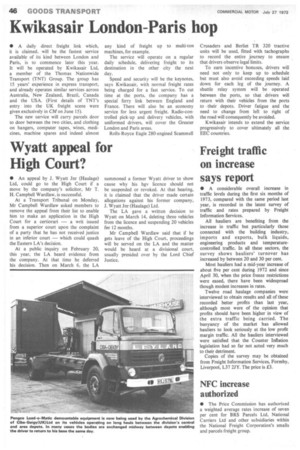 • An appeal by J. Wyatt Jnr (Haulage) Ltd, could go to the High Court if a move by the company's solicitor, Mr T. H. Campbell Wardlaw, is successful.

At a Transport Tribunal on Monday. Mr Campbell Wardlaw asked members to remove the appeal from their list to enable him to make an application in the High Court for a certiorari — a writ issued from a superior court upon the complaint of a party that he has not received justice in an inferior court — which could quash the Eastern LA's decision.

At a public inquiry on February 20, this year, the LA heard evidence from the company. At that time he deferred his decision. Then on March 6. the LA summoned a former Wyatt driver to show cause why his hgv licence should not be suspended or revoked. At that hearing, it is claimed that the driver made certain allegations against his former company, J. Wyatt Jnr (Haulage) Ltd.

The LA gave a written decision to Wyatt on March 14, deleting three vehicles from the licence and suspending 20 vehicles for 12 months.

Mr Campbell Wardlaw said that if he gets leave of the High Court, proceedings will be served on the LA and the matter would be heard at a divisional court, usually presided over by the Lord Chief Justice.