'Transport in the Borders' 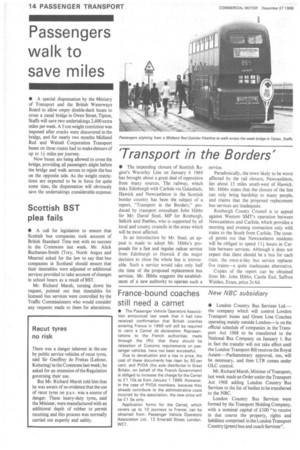 • The impending closure of Scottish Region's Waverley Line on January 6 1969 has brought about a great deal of opposition from many sources. The railway, which links Edinburgh with Carlisle via Galashiels. Hawick and Newcastleton in the Scottish border country has been the subject of a report, "Transport in the Borders," produced by transport consultant John Hibbs for Mr: David Steel, MP for Roxburgh, Selkirk and Peebles, who is supported by all local and county councils in the areas which will be most affected.

In an introduction by Mr. Steel, an appeal is made to adopt Mr. Hibbs's proposals for a fast and regular railcar service from Edinburgh to Hawick if the major decision to close the whole line is irrevocable. Such a service would take only half the time of the proposed replacement bus services. Mr. Hibbs suggests the establishment of a new authority to operate such a service.

Paradoxically, the town likely to be worst affected by the rail closure, Newcastleton, lies about 15 miles south-west of Hawick. Mr. Hibbs states that the closure of the line can only bring hardship to many people, and claims that the proposed replacement bus services are inadequate.

Roxburgh County Council is to appeal against Western SMT's operation between Newcastleton and Carlisle, which provides a morning and evening connection only with trains to the South from Carlisle. The council points out that Newcastleton residents will be obliged to spend I 4 hours in Carlisle between services. Although it does not expect that there should be a bus for each train, the once-a-day bus service replaces five trains—a quite inadequate alternative.