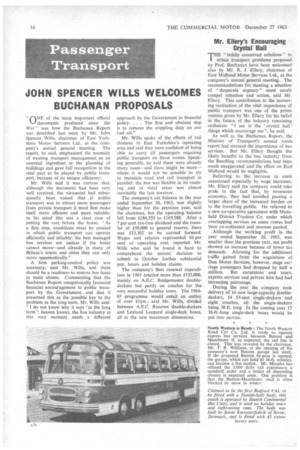 Page 18, 27th December 1963 — Mr. Ellery's Encouraging Crystal Ball
Close
Noticed an error?
If you've noticed an error in this article please click here to report it so we can fix it.
Keywords : Buxton

"boldly conceived solutions" to Turban transport problems proposed by Prof. Buchanan have been welcomed also by Mr. R. J. Ellery, chairman of East Midland Motor Services Ltd., at the company's annual general meeting. The recommendations for meeting a situation of "desperate urgency" must surely compel attention and action, said Mr. Ellery. This contribution to the increasing realization of the vital importance of public transport was one of the prime reasons given by Mr. Ellery for his belief in the future of. the industry remaining unshaken: "I see in the 'crystal ball' things which encourage me ", he said.

As well as the Buchanan Report, the Minister of Transport's annual roads report had stressed the importance of bus services. But Mr. Ellery thought the likely benefits to the bus industry from the Beeching recommendations had been much exaggerated and the effect on East Midland would be negligible.

Referring to the increase in costs occasioned especially by wage increases, Mr. Ellery said the company could take pride in the fact that, by strenuous economy, they had avoided passing a larger share of the increased burden on to the travelling public. He referred to a new co-operative agreement with Mansfield District Traction Co. under which overlapping services on some routes had been co-ordinated and revenue pooled.

Although the working profit in the year ended September 30, 1963, was smaller than the previous year, net profit showed an increase because of lower tax demands. Allowing for the additional traffic gained from the acquisition of Don Motor Services, however, stage 'carriage passengers had dropped by half a million. But excursions and tours, express services and private hire had had increasing patronage.

During the year the company took delivery of 14 new large-capacity doubledeckers, 14 53-seat single-deckers and eight coaches, all the single-deckers being 36 ft. long In the coming year 17 36-ft.-long single-deck buses would be put into service.

Road Car Co. Ltd_ s ready to operate express bus services between Buxton and Manchester if, as expected, the rail line is closed. This was revealed by the chairman, Mr. T. R. Williams, at the opening of the company's new Buxton garage last week. If the proposed Buxton by-pass is opened, the garage, which can hold 40 36-ft. vehicles, can become a bus station.. Mr. Marples has refused the 3,000 daily rail commuters a standstill order and a notice of impending closure is expected soon. One problem is that the Buxton-Manchester road is often blocked by snow in winter.