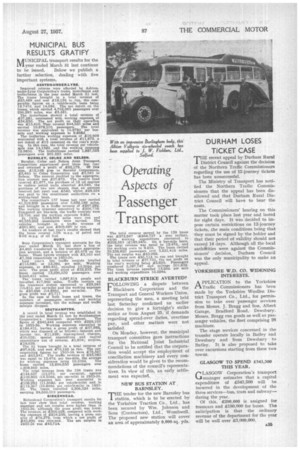 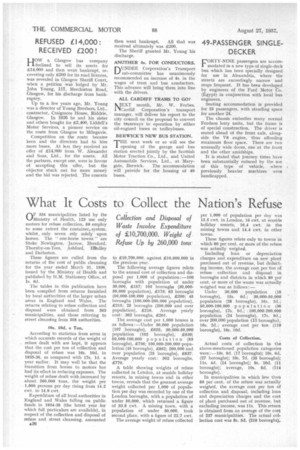 MUNICIPAL transport results for the

year ended March 31 last continue to be issued. Below we publish a further selection, dealing with five important systems,

Burnley, Collie and Nelsen Joint Transport, Committees experienced good times last year and returned a profit of 522,179. Of this sum, £13,169 goes to Burnley Corporation, £3,465 to Colne Corporation and 55,545 to Nelson. The amount credited to the appropriation account was 557,870. The reserve fund received 41,077, the purchase of 12 oil engines to replace petrol unite absorbed 44,940, the purchase of two new chassis (less an amount reserved last year) cost 4.340, whilst 529,354 was paid to the constituent authorities on a sinking-fund basis.

In the case of both buses and trams, the numbers of passengers carried and working expenses increased, but the mileage and traffic receipts dropped.

FOLLOWING a dispute between Blackburn Corporation and the Transport and General Workers Union. representing the men, a meeting held last Saturday confirmed an earlier decision to give a fortnight's strike notice as from August 25, if demands regarding spread-over duties, overtime pay, and other matters were not satisfied.

On Monday, however, the municipal transport committee gave instructions for the National Joint Industrial Council to be notified that the corporation would accept the employment of conciliation machinery and every consideration would be given to the recommendations of the council's representatives. In view of this, an early settlement was expected, NEW' BUS STATION AT BARNSLEY.

THE tender for the new Barnsley bus station, which is to be erected by the Yorkshire Traction Co., Ltd., has been secured by Wm. Johnson and Sons (Contractors), Ltd., Wombwell. The proposed new station will cover an area of approximately 9,000.sq. yds.

THE recent appeal by Durham Rural J. District Council against the decision of the Northern Traffic Commissioners regarding the use of 12-journey tickets has been unsuccessful.

The Ministry of Transport has notified the Northern Traffic Commissioners that the appeal has been disallowed and that Durham Rural District Council will have to bear the costs.

The Commissioners' hearing on this matter took place last year and lasted for eight days. It was decided to impose certain restrictions on 12-journey tickets, the main conditions being that they must be signed by the holder and that their period of validity should not exceed 14 days. Although all the local autheltities were against the Commissioners' decision, Durham Council was the only municipality to make an

A PPLICATION to the Yorkshire PI Traffic Commissioners has been made by the Yorkshire Woollen District Transport Co., Ltd., for permission to take over passenger services from Messrs. J. Bragg and Son, Albert Garage, Bradford Road, Dewsbury. Messrs. Bragg run goods as well as passenger vehicles, the fleet comprising 28 machines.

The stage services concerned in the transfer operate locally in Batley and Dewsbury and from Dewsbury to Batley. It is also proposed to take over excursions starting from these two towns.

GLASGOW Corporation's transport manager estimates that a capital expenditure of £543,500 will he incurred in the development of the three services-bus, tram and subwayduring the year. Of this, 1200,000 is assigned for tramcars and £180,000 for buses. The anticipation is that the ordinary revenue of the department for the year will be well over 9.3,000,000.

HOW a Glasgow bus company declined to sell its assets for £14,000 and then went bankrupt, recovering only £200 for its road licences, was revealed in Glasgow Sheriff Court, when a petition was lodged by Mr. John Young, 117, Merchiston Road, Glasgow, for his discharge from bankruptcy.

Up to a few years ago, Mr. Young was a director of Young Brothers, Ltd., contractor, Craigmore House, Riddrie, Glasgow. In 1926 he and his sister and others bought for £2,400, Liddell's Motor Services, a pioneer service on the route from Glasgow to Milngavie.

Competition on the route became keen and the directors had to hire more buses. At lest they received an offer of £14,000 from W. Alexander and Sons. Ltd., for the assets. All the partners, except one, were in favour of accepting this offer, but the objector stuck out for more moneY and the bid was rejected. The concern then went bankrupt. All that was received ultimately was £200.

ANOTHER 4s. FOR CONDUCTORS.

DUNDEE Corporation's Transport sub-committee has unanimously recommended an increase of 4s. in the wages of tram and bus conductors. This advance will bring them into line with the drivers,

ALL CARDIFF TRAMS TO GO?

MEXT month, Mr. W. Forbes, I 1Cardiff Corporation's transport manager, will deliver his report to the city council on the proposal to convert the tramways to operation by either oil-engined buses or trolleybuses,

THE next week or so will see the opening of the garage and bus station erected jointly by the Scottish Motor Traction Co., Ltd., and United Automobile Services, Ltd., at Mary gate, Berwick. The accommodation will provide for the housing of 40 buses.

CORTY-NINE passengers are accom modated in a new type of single-deck bus which has been specially designed for use in Alexandria, where the streets are exceedingly narrow and stops frequent. It has been developed by engineers of the Ford Motor Co. (Egypt) in conjunction with local bus engineers.

Seating accommodation is provided for 25 passengers, with standing space for another 24.

The chassis embodies many normal Fordson lorry units, but the frame is of special construction. The driver is seated ahead of the front axle, alongside the V8 engine, thus affording maximum floor space. There are two unusually wide doors, one at the front and the other amidships.

It is stated that journey times have been substantially reduced by the use of this type of vehicle, where previously heavier machines were handicapped.