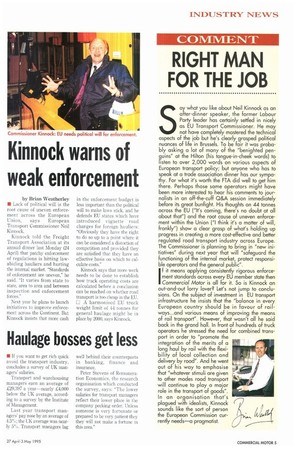 Page 7, 27th April 1995 — Kinnock warns of weak enforcement
Close
Noticed an error?
If you've noticed an error in this article please click here to report it so we can fix it.
Keywords : Life Peers, Neil Kinnock, Kinnock, European Commissioner For Transport

by Brian Weatherley • Lack of political will is the root cause of uneven enforcement across the European Union, says European Transport Commissioner Neil Kinnock.

Kinnock told the Freight Transport Association at its annual dinner last Monday (24 April) that patchy enforcement of regulations is hitting lawabiding hauliers and hurting the internal market. "Standards of enforcement are uneven," he said. "It varies from state to state, area to area and between inspection and enforcement forces."

Next year he plans to launch initiatives to improve enforcement across the Continent. But Kinnock insists that more cash in the enforcement budget is less important than the political will to make laws stick, and he defends EU states which have introduced vignette road charges for foreign hauliers: "Obviously they have the right to do so up to a point where it can be considered a distortion of competition and provided they are satisfied that they have an effective basis on which to calciliate costs."

Kinnock says that more work needs to be done to establish how truck operating costs are calculated before a conclusion can be reached on whether road transport is too cheap in the Ell. A harmonised EU truck weight limit of 44 tonnes for general haulage might be in place by 2000, says Kinnock.