Not the meter, but the bracket 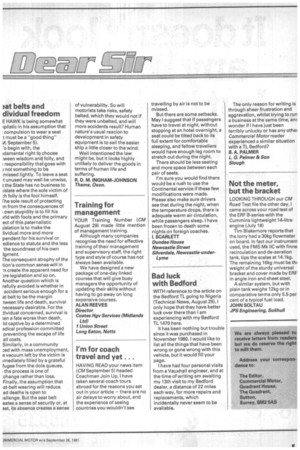 Page 17, 26th September 1981 — Not the meter, but the bracket
Close
Noticed an error?
If you've noticed an error in this article please click here to report it so we can fix it.
Keywords : Sandbach, Erf, Man Ag, Aeration, Finne, Geography

LOOKING THROUGH our CM Road Test file the other day, I came across your road test of the ERF B-series with the Cummins lightweight 14-litre engine (July 18) Tim Blakemore reports that the lorry had a 30kg flowmeter on board. In fact our instrument used, the FMS Mk IIC with finne recirculation and de-aeration tank, tips the scales at 14.1kg. The remaining 16kg must be thi weight of the sturdy universal bracket and cover made by ERF in angle iron and sheet steel.

A similar system, but with plain tank weighs 12kg or in comparative terms only 5.5 per cent of a typical fuel load. JOHN SOLTAU OS Engineering, Solihull