MOre. Trailer • at the Show 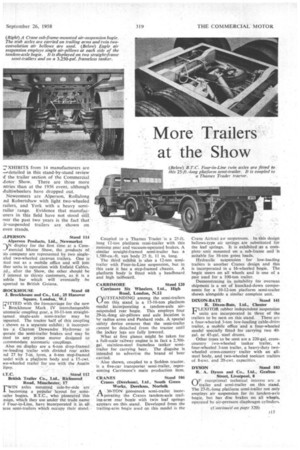 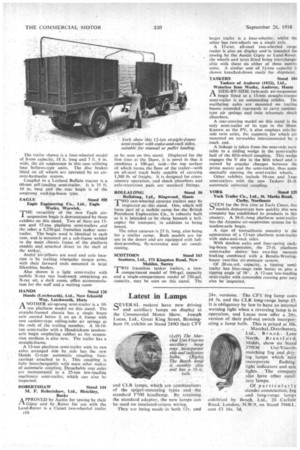 Page 173, 26th September 1958 — MOre. Trailer • at the Show
Close
Noticed an error?
If you've noticed an error in this article please click here to report it so we can fix it.

— 'XHIBITS from 14 manufacturers are — detailed in this stand-by-stand review of the trailer section of the Commercial dotor Show. There are three more 'fifties than at the 1956 event, although J ultiwheelers have dropped out. Newcomers are Alperson, Rollalong nd Robertshaw with light two-wheeled milers, and York with a heavy semirailer range. Evidence that manufacurers in this field have not stood still iver the past two years is the fact that ir-suspended trailers are shown on even stands.

LLPERSON Stand 114 Alperson Products, Ltd., Newmarket -IN display for the first time at a C0111

mercial Motor Show, the products of xis company are represented by two single-. xled two-wheeled caravan trailers. One is tted out as a mobile office and will join ther units in operation with Enfield Cables, Ad., after the Show, the other, should be f interest to thirsty customers, as it is a lobile bar which will 'eventually be sported to British Guiana.

utomatie coupling gear, a 10-11-ton straightramed single-axle . semi-trailer may be ispected. The tractor half of this coupling ; shown as a sepaerate exhibit; it incorpor-. tes a Clayton " Dewandre Hydrovac to iper-ate the semi-trailer brakes and may be itted to any prime mover designed to

ccominodate automatic couplings. Also on display are a 6-ton drop-framed )w-loading trailer with divided rear axles nd 27 by 7-in. tyres, a 6-ton step-framed lodel with a platform body and a 15-ewt, wo-wheeled trailer for use with the Austin I.T.C. Stand 112 British Trailer Co., .Ltd., Richmond Road, Manchester, 17

FWIN axles mounted side-by-side are becoming a popular layout for semirailer bogies. B.T.C., who pioneered this esign, which they use under the trade name if Four-in-Line, have incorporated it in au aree semi-trailers which occupy their stand.

Coupled to a Thames Trader is a 25-ft. long 12-ton platform semi-trailer with this running gear and vacuum-operated brakes. A similar straight-framed semi-trailer has a 1,580-cu.-ft. van body 25 ft. 11 in. long.

The third • exhibit is also a 12-ton semitrailer with Four-in-Line suspension, but in this caie it has a step-framed chassis. A platform body is fitted with a headboard and high tailboard.

CUTSTANDING among the semi-trailers on this stand is a 15-16-ton platform model indorporating a tandem-axle airsuspended rear bogie. This employs four 29-in.-long air-pillows and axle location is by radius arms and Panhard rods. A special safety device ensures that the semitrailer cannot be detached from the tractor until the jockey legs are fully lowered.

What at first glance might be taken for a full-scale' railway engine is in fact a 2,700gal. stainless-steel frameless tanker semitrailer for carrying beer. The disguise is • intended to advertise the hrand of beer carried, Also shown, coupled to a Seddon tractor. is a five-car transporter semi-trailer, representing Carrimore's main production item.

A30-TON gooseneck semi-trailer incorporating the Cranes tandem-axle trailing-arra rear bogie with twin leaf springs appears on this stand. Developed from the trailing-arm bogie used on this model is the Crane Airtraii air suspension. In this design bellows-type air springs are substituted for the leaf springs. It is exhibited as a cornplete unit mounted on a sub-frame and -is suitable for 16-ton gross loads.

Hydraulic suspension for low-loading trailers is another Cranes design and this is incorporated in a 16-wheeled bogie. The bogie steers on all wheels and is one of a pair used for a 100-ton trailer.

Demonstrating its suitability for overseas shipment is a set of knocked-down components for a 10-12-ton platform semi-trailer shown alongside a similar complete unit.

units are incorporated in three of the trailers to be seen on this stand. These are a four-wheeled 3-ton low-loading cable-claim trailer, a mobile office and a four-wheeled model specially fitted for carrying two 40gal, or 45-gal, steel drums.

Other types to be seen are a 220kgal. crosscountry two-wheeled tanker trailer, a four-wheeled 3-ton trailer, a heavy-duty twowheeled cross-country trailer with an allsteel body, and twO-wheeled toolcart trailers of 8-cwt. and 20-cwt. capacities.

UF exceptional technical interest are a trailer and semi-trailer on this stand. The 27-ft.-long platform semi-trailer not only employs air suspension for its tandem-axle bogie, but has disc brakes on all wheels, operated by air-pressure diaphragm cylinders.

The trailer shown is a four-wheeled model of 8-ton capacity, 18 ft. long and 7 ft. 6 in. wide, the air suspension in this case utilizing four bellows-type units. The disc brakes fitted on all wheels are operated by an airover-hydraulic system.

Coupled to a Leyland Buffalo tractor is a60-ton self-loading semi-trailer. It is 35 ft. 10 in: long and the rear bogie is of the unsprung walking-beam type.

THE versatility of the new Eagle airsuspension bogie is demonstrated by three exhibits on this stand. Two of these are 15ton and 17-ton platfOrm semi-trailers and the other a 3;250-gal. frameless tanker semitrailer. The--bogie used is identical in each case, and is mounted on a sub-frame welded to the main chassis frame of the platform• models and attached direct to the shell of the tanker,

Andre aipillows are used and axle location is by trailing triangular torque arms, with their forward ends mounted in large Silentbloc bushes.

ANOTHER air-sprung semi-trailer is a 10ton platform model on this stand: The straight-framed chassis has a single beam axle carried below it on an A frame with two canister-type rolling-lobe air springs at the ends of the trailing member. A 16-18ton semi-trailer with a Hendrickson tandemaxle bogie employing rubber as the suspension medium is also new. The trailer has a straight-frame.

A 12-ton platform semi-trailer with its two axles arranged side by side has the new Hands G-type automatic coupling forecarriage attached to it. This coupling is fully interchangeable with most other makes of autbmakic coupling. Detachable rear aides are incorporated in a 25-ton low-loading machinery semi-trailer, which can also be inspected.

LO be seen on this stand, Displayed for the first time at the Show, it is novel in that it combines a 100-gal, tank—the top surface of which forms the floor of the trailer—with an all-steel truck body capable of carrying 1,500 lb. of freight. It is designed for crosscountry operation, and shock absorbers and axle-restriction pads are standard fittings.

TWO two-wheeled caravan trailers may be inspected on this stand. One, which will form part of a mobile camp for the British Petroleum Exploration Co., is robustly built as it is intended to be slung beneath a helicopter for transport, in addition to being towed.

The other caravan is 27 ft. long, also being for a similar camp. Both models are for use in the desert and arc equipped with fulldust-proofing, fly-screening and air conditioning.

larger trailer is a four-wheeler, whilst the other has two-wheels on a single axle.

A 15-cwt. all-steel two-wheeled eargc trailer is also on display and-is intended for towing by the Austin Gipsy or Land-Rover, the wheels and tyres fitted being interchangeable with those on either of these motive units. A similar unit of 1-ton capacity is shown knocked-down ready for shipment.

A rear-steering model on this stand is the only semi-trailer of its type in the Show. Known as the PV, it also employs side-by. side twin axles, the supports for which are mounted on turntables interconnected by a track rod.

A linkage is taken from the near-side turntable to a sliding wedge in the semi-trailet half of the fifth-wheel coupling. This wedge engages the V slot in the fifth wheel and is moved by angular changes between the prime mover and the semi-trailer, thus automatically steering the semi-trailer wheels.

Other exhibits include 10-ton and 3-ton semi-trailers with the new Taskers p.-s. automatic universal coupling.

SEEN for the first time at Earls Court, live models demonstrate how quickly this new company has established its products in this country. A 24-fl-long platform semi-trailer has the Airpoise air-suspension system for its tandem-axle bogie.

A sign of transatlantic ancestry is the appearance of a 12-ion platform semi-trailei with stake-and-rack sides.

Of 20-cu.--yd. capacity, a tipping semitrailer has four-stage twin hoists to give a tipping angle of 50°. A I2-ton low-loading semi-trailer with removable running gear may also be inspected.