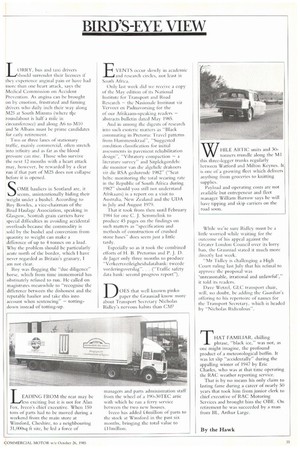 LORR Y, bus and taxi drivers should surrender their licences if they experience anginal pain or have had inore than one heart attack, says the Medical Commission on Accident Prevention. As angina can be brought on by emotion, frustrated and fuming drivers who daily inch their way along M25 at South Mimms (where tLie roundabout is half a mile in circumference) and along A6 to M10 and St Albans must be prime candidates for early retirement.

Two or three lanes 01 stationary traffic, mainly commercial, often stretch into infinity and as far as the blood pressure can rise. Those who survive the next 12 months with a heart attack may, however, be rewarded by a clear run if that part of M25 does not collapse before it is opened.

SOME hauliers in Scotland are, it seems, unintentionally hiding their weight under a bushel. According to Roy Bowles, a vice-chairman of the Road Haulage Association, speaking in Glasgow, Scottish grain carriers have special difficulties in avoiding accidental overloads because the commodity is sold by the bushel and conversion from quantity to weight can make a

difference of up to 4 tonnes on a load. Why the problem should be particularly acute north of the border, which I have never regarded as Britain's granary, I am not clear.

Roy was flogging the "due diligence" horse, which from time immemorial has obstinately refused to run. He called on magistrates meanwhile to "recognise the difference between the dishonest and the reputable haulier and take this into account when sentencing" — tottingdown instead of totting-up.

LEADING FROM the rear may be less exciting but it is not for Alan Fox, Iveco's chief executive. When 150 tons of parts had to be moved during a weekend from the main store at Winsford, Cheshire, to a neighbouring 31,000sq ft site, he led a force of EVENTS occur slowly in academic and research circles, not least in South Africa.

Only last week did we receive a copy of the May edition of its National Institute tbr Transport and Road Research — the Nasionale histituut vir Vervoer en Padnavorsing for the of our Afrikaans-speaking readers — abstracts bulletin dated May 1985.

And in among the digests of research into such esoteric matters as "Black commuting in Pretoria: Travel patterns from Hammenskraal", "Suggested condition classification Ibr initial assessments in pavement rehabilitation design", "Vibratory compaction — a literature survey" and Sitplckgordels: die monitor van die algehele drakocrs vir die RSA gedurende 1982" ("Seat belts: monitoring the total wearing rate in the Republic of South Africa during 1982" should you still not understand Afrikaans) is a report on a visit to Australia, New Zealand and the LIDA in July and August 1979.

That it took from then until February 1984 for one C. J. Semmelink to produce 43 pages on the findings on such matters as "specification and methods of construction of crushed stone bases" does seem just a little tardy.

managers and parrs administration stair from the wheel of a 190-30TEC artic with which he ran a ferry service between the two new houses.

Iveco has added i24million of parts to the stock at Winsford in the past six months, bringing the total value to l I million.

WHILE API IC units and 30airliners trundle along the MI this three-legger trunks regularly between Watford and Milton Keynes. It is one of a growing fleet which delivers anything from groceries to knitting supplies.

Payload and operating costs are not available but entrepeneur and fleet manager William Barrow says he will have tipping and skip carriers on the road soon.

While we're sure Ridley must be a little worried while waiting for the outcome of his appeal against the Greater London Council over its lorry ban, the Grauniad stated it much more directly last week.

"Mr Tidley is challenging a High Court ruling last July that his refusal to approve the proposal was 'unreasonable, irrational and unlawful'," it told its readers.

Dave Wetzel, GLC transport chair, will, no doubt, be adding the Guardian's offering to his repertoire of names for the Transport Secretary, which is headed by "Nicholas Ridiculous".

THAT FAMILIAR, chilling phrase, "black ice," was not, as one might imagine, the profound product of a meteorological boffin. It was let slip "accidentally" during the appalling winter of 1947 by Eric Charles, who was at that time operating the RAC weather reporting service.

That is by no means his only claim to lasting fame during a career of nearly 50 years that rook him from junior clerk to chief executive of RAC Motoring Services and brought him the OBE. On retirement he was succeeded by a man from BL, Arthur Large.