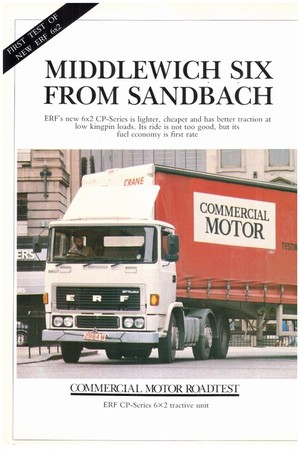 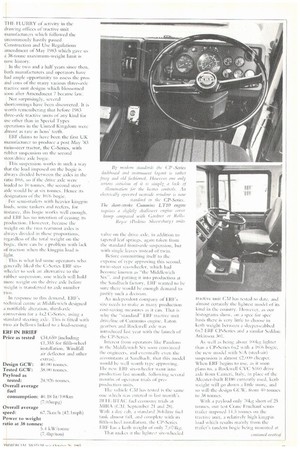 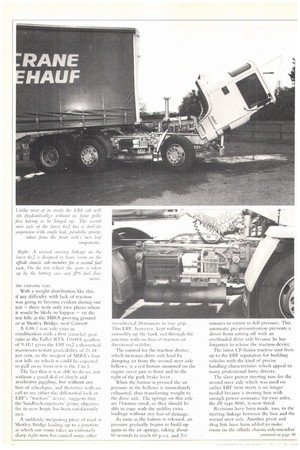 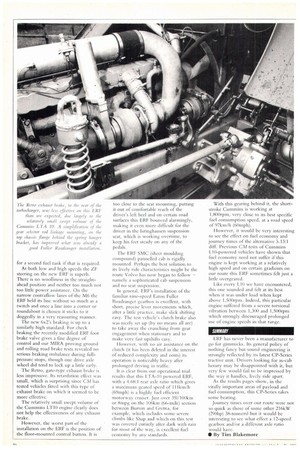 ERF's new 6x2 CP-Series is lighter, cheaper and has better traction at low kingpin loads. Its ride is not too good, but its fuel economy is first rate

intendment of May 1983 which gave us 38-tonne maximum-weight limit is IOW history.

In the two and a half years since then, ioth manufacturers and operators have lad ample opportunity to assess the pros aid cons of the many various three-axle ractive unit designs which blossomed oon alter Amendment 7 became law. Not surprisingly, several hortcomings have been discovered. It is vorth remembering that before 1983 hree-axle tractive units of any kind for Ise other than in Special Types

>perations in the United Kingdom were :Imost as rare as hens' teeth.

ERF claims to have been the first UK nanufacturer to produce a post May '83 win-steer tractor,. the C-Series, with libber suspension on the second teer/drive axle hogie.

This suspension works in such a way hat the load imposed on the bogie is kways divided hetween the axles in the -atio 106, so if the drive axle were oaded to II) tonnes, the second steer ixle would be at six tonnes. Hence its lesignation ‘if the 111/6 bogie.

for semi-trailers with heavier kingpin

oads, some tankers reefers, for nstanee, tins bogie works well enough, aid ERF has no intention of ceasing its voduction, lowever, because the veight on the MO rearmost axles is "ways divided in these proportions, .ev,ardless of the total weight on the )ogie, there can be a problem with Lick )1 :traction when the kingpin load is ight.

This is what led some operators who :,encrally liked the C.:-Serics ERE sixyheeler to seek an alternative to the labbcr suspension, one which will hold note weight on the drive axle before .vcight is transferred to axle number wo.

In response to this demand, ERF's echnical centre at Muldlu‘tvich designed notifiable alteration, third-axle :onversion for a 4x2C-Series, using a randard steering axle. Tins is fitted with wo air bellows linked to a load-sensing

valve on the drive axle, in addition to tapered leaf springs„igain taken from the standard front-axle Suspension, but with single leaves instead of twin.

Before committing itself to the expense of type approving this second, twin-steer six-wheeler, which had become known as -tlw Middlewich Six-, and putting it into production at the Sandbach flictory, ER 1: wanted to be sure there would be enough) demand to jostitY such a decision, An independent company of ERb's s17e needs to inake as many production cost-saying measures as it can. That is why the -standard" ERF tractive unit driveline of Cummins clIgme, 1:aton gearbox and Rockwell ix he WAS introduced last year with the Lunch of the (.I1-Series.

Interest from operators like Pandoro in the Middlewich Si N soon convitieed die engineers, and eventually' even the accountants at Sandbach, that this model would be well worth type approving. The new ER+ six-wheeler went into production last month, following, several months of operator trials of preproduction units.

The vehicle CM has tested is the saline

!RI hid economy trials at MIRA (C.IL September 21 and 28).. With a day cab. a standard 364-litre tile! tank almost full, and complete with its fifth-wheel installation, the CI'-Series ERF has a kerb weigh' of only 7.074kg.

That makes it the lightei,t six-wheeled

tractive unit CM has rested to date, and almost certainly the lightest :node! of its kind in the country. However, is our histograms show, on a spec for spec basis there is very little to choose in kerb weight between a sleeper-cabbed 6x2 ERF CP-Series and a similar Seddon Atkinson Si Il.

As well is beingabout /00kg lighter than a Cli-Scries (ix2. with a 10/6 bogie, the new model with SiA (steel-air) suspension is almost V,2,000 cheaper. When Eltl= begins to use, as it soon plans to. a Rockwell (WC 8160 drive axle from Gamer:, Italy, in place oldie Alcester-built R1811 currently used. kerb weight will go down a little more, and so will the design C.CW. from 40 tonnes to 38 tonnes.

With a payload only 76kg short of 25 tonnes, our jest Crane Fruehauf semitrailer imposed 14.5 tonnes on thc tractive unit, arelatively high kingpin load which results mainly (rpm the trailer's tandem bog it' being, mounted at

With a weight distribution like this, if any difficulty with lack of traction was going to become evident during our test — there were only two places where it would be likely tohappen — on the test hills at the 1V11RA proving ground or at ShotLy Bridge, near Consett.

A 4.88.1 rear axle ratio in combination with a first (crawler) gear ratio in the Fuller RTX I 1609A• gearbox of 9.41:1 gives the FRI; 6x2 a theoretical maximum restart gradeabilitv of 21.44 per cent, so the steepest of MIRA's four test hills on which it could be expected to pull away from rest is the 1 in F.

The fact that it was able rt.) do so, not without a good deal of clutch and accelerator juggling, but without any hint of wheelspin, and therefore with no call to use either the differential .lock or ERF's "tractiondevice, suggests that the Sandbach engineers' prime objective for its new bogie has been satisfactorily met.

A suddenly steepening piece of. road at Shotley Bridge-leading up to a junction at which our route rakes an extremely sharp right turn bas caused sonic other six-wheeled 38-tonners to lose grip. This MI', however, kept rolling smoothly up the bank and through the junction with no loss of traction or directional stability.

The-control for the traction device, which increases drive axle load by dumping air from the second steer axle bellows, is ared button mounted on the engine cover just in front and to the right of the park brake lever.

When the button is pressed the air pressure in the bellows is immediately exhausted, thus transferring weight to the drive axle. The springs on this axle • are 13-tonne rated, so they should be a.b.le to cope with the sudden extra loadings without any Fear of damage.

As soon as the button is released, air ptessurc gradually begins to build up again in the sir springs, taking about 60 seconds to reach 61) p.s.i. and 21/2

minutes to return to lull pressure. This automatic pre-pressurisation prevents a driver from setting. off with an overloaded drive axle because he has forgotten to release the traction device.

The latest (LT-Series tractive Unit lives up to the ERF reputation for building vehicles with the kind of precise handling characteristics which appeal to many professional lorry drivers.

The slave power steering ram for the second steer axle which was used on earlier ERF twin steers is no longer needed because a steering box with enough power assistance for two axles, the ZF type 8046, is now fitted.

Revisions have been made, too, to the steering linkage between the box and the second steer axle. Another pivot and drag link have been added to make room on the offside chassis side-member for a second fuel tank if that is required.

At both low and high speeds the ZF steering on the new ERF is superb. There is no woolliness in the straightahead position and neither too much nor too little power assistance. On the narrow contraflow lanes of the MG the ERF held its line without so much as a twitch and once a line into a corner or roundabout is chosen it sticks to it doggedly in a very reassuring manner.

The new 6x2's braking is up to a similarly high standard. For check braking the recently modified ERF foot brake valve gives a fine degree of control and our MIRA proving ground and rolling road brake tests revealed no serious braking imbalance during fullpressure stops, though one drive axle wheel did tend to lock up a little early.

The Retro, gate-type exhaust brake is less impressive. Its retardation effect was small, which is surprising since CM has tested vehicles fitted with this type of exhaust brake on which it seemed to be more effective.

The relatively small swept volume of the Cummins LT 10 engine clearly does not help the effectiveness of any exhaust brake.

However, the worst part of the installation on the ERF is the position of the floor-mounted control button. It is too close to the seat mounting, putting it out of comfortable reach of the driver's left heel and on certain road surfaces this ERF bounced alarmingly, making it even more difficult for the driver in the lsringhausen suspension scat, which is working overtime, to keep his feet steady on any of the pedals.

The ERF SMC (sheet moulding compound) pannelled cab is rigidly mounted. Perhaps the best solution to its lively ride characteristics might be the route Volvo has now began to follow — namely a sophisticated cab suspension and no seat suspension.

In general, ERF's installation of the familiar nine-speed Eaton Fuller Roadranger gearbox is excellent, with short, precise lever movements which, after a little practice, make slick shifting easy. The test vehicle's clutch brake also was nicely set up (by no means all arc) to take away the crunching from gear engagement when stationary and to make very fast upshifts easy.

However, with no air assistance on the clutch (it has been deleted in the interest of reduced complexity and costs) its operation is noticeably heavy after prolonged driving in traffic.

It is clear from our operational trial results that this LTA-10 powered ERF, with a 4.68:1 rear axle ratio which gives a maximum geared speed of 111km/h (69mph) is a highly fuel efficient motorway cruiser. Just over 351/100km or 8mpg on the 106km (66-mile) section between Burton and Gretna, for example, which includes some severe climbs like Shap and which on this test was covered entirely after dark with rain for most of the way, is excellent fuel . economy by any standards. With this gearing behind it, the shortstroke Cummins is working at 1,800rpm, very close to its best specific fuel consumption speed, at a road speed of 97km/h (60mph).

However, it would be very interesting to see the effect on fuel economy and journey times of the alternative 5.13:1 diff. Previous CM tests of Cummins L10-powered vehicles have shown that fuel economy need not suffer if this engine is kept working at a relatively high speed and on certain gradients on our route this ERF sometimes felt just a little overgeared.

Like every L10 we have encountered, this one sounded and felt at its best when it was under load when kept above 1,500rpm. Indeed, this particular engine suffered from a severe torsional vibration between 1,300 and 1,500rpm which strongly discouraged prolonged use of engine speeds in that range.

ERF has never been a manufacturer to go for gimmicks. Its general policy of nothing fancy but sound engineering • is strongly reflected by its latest CP-Series tractive unit. Drivers-looking for in-cab luxury may be disappointed with it, but very few would fail to he impressed by the way it handles, lively ride apart.

As the results pages show, in the vitally important areas of payload and fuel consumption, this CP-Series takes some beating.

Journey times over our route were not so quick as those of some other 216kW (290hp) 38-tormers1 but it would be interesting to see what effect a 12-speed gearbox and/or .a different axle ratio would have.