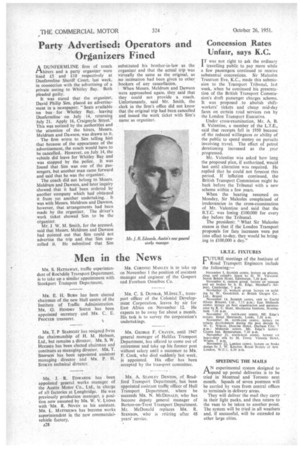 IT was not right to ask the ordinary / travelling public to pay more while a few passengers continued to receive substantial concessions. Sir Malcolm Trustram Eve, K.C., made this submission to the Transport Tribunal, last week, when he continued his presentation of the British Transport Commission's draft passenger charges scheme. It was proposed to abolish shiftworkers' tickets and cheap mid-day fares on certain road services run by the London Transport Executive.

Under cross-examination, Mr. A. B. B. Valentine, a member of the L.T.E., said that receipts fell in 1950 because of the reduced willingness or ability of the public to spend money on pursuits involving travel. The effect of petrol derationing increased as the year progressed.

Mr. Valentine was asked how long the proposed plan, if authorized, would last until alteration was required. He replied that he could not forecast this period. If inflation continued, the British Transport Commission might be back before the Tribunal with a new scheme within a few years. When the hearing resumed on Monday, Sir Malcolm complained of irrelevancies in the cross-examination of Mr. Valentine and Said that the B.T.C. was losing £100,000 for every day before the Tribunal.

The president: "What Sir Malcolm means is that if the London Transport proposals for fare increases were put into effect to-day, they would be bringing in £100,000 a day."