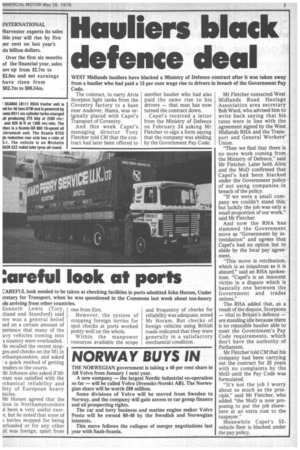 taken at checking facilities in ports admitted John Horam, Under he was questioned In the Commons last week about too-heavy ies. GAREFUL look needed to be cretary for Transport, when ids arriving from other countr Kenneth Lewis (Tory, Itland and Stamford) said ere was a general belief sed on a certain amount of perience that many of the avy vehicles coming into s country were overloaded. He recalled the recent stopges and checks on the MI in Irthamptonshire, and asked a quick method of getting 'enders to the courts.

Vir Johnson also asked if Mr Iram was satisfied with the chanical reliability and Fety of European heavy hides.

Mr Horam agreed that the tion in Northamptonshire d been 11 very useful exere, but he noted that none of lorries stopped for being erloaded or for any other itt was foreign, apart from one from Eire.

However, the system of stopping foreign lorries for spot checks at ports worked pretty well on the whole.

Within the manpower resources available the scope and frequency of checks for reliability was adequate, noted Mr Horam. But checks of foreign vehicles using British roads indicated that they were generally in a satisfactory mechanical condition.