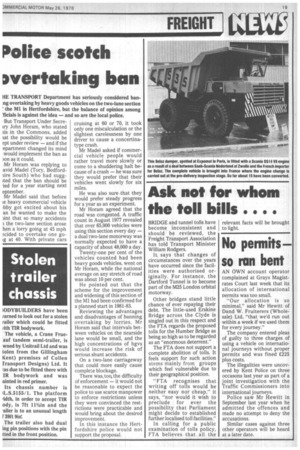 HE TRANSPORT Department has seriously considered banng overtaking by heavy goods vehicles on the two-lane section ' the MI in Hertfordshire, but the balance of opinion among ficials is against the idea — and so are the local police.

But Transport Under Secreiry John Horam, who stated is in the Commons, added tat the possibility would be ept under review — and if the epartment changed its mind would implement the ban as )on as it could.

Mr Horam was replying to avid Madel (Tory, Bedfordlire South) who had suggited that the ban should be lied for a year starting next eptember.

Mr Madel said that before ie heavy commercial vehicle ,bby got excited about his an he wanted to make the )int that so many accidents the two-lane section arose hen a lorry going at 45 mph ecided to overtake one golg at 40. With private cars cruising at 60 or 70, it took only one miscalculation or the slightest carelessness by one driver to cause a concertinatype crash.

Mr Madel asked if commercial vehicle people would rather travel more slowly or come to a shuddering halt because of a crash — he was sure they would prefer that their vehicles went slowly for six miles.

He was also sure that they would prefer steady progress for a year as an experiment.

Mr Horam agreed that the road was congested. A traffic count in August 1977 revealed that over 65,000 vehicles were using this section every day — a dual two-lane motorway was normally expected to have a capacity of about 48,000 a day.

Twenty-one per cent of the vehicles counted had been heavy goods vehicles, went on Mr Horam, while the national average on any stretch of road was about 10 per cent.

He pointed out that the scheme for the improvement and widening of this section of the MI had been confirmed for a planned start in 1981-83.

Reviewing the advantages and disadvantages of banning overtaking by lorries, Mr Horam said that intervals between vehicles on the nearside lane would be small, and the high concentrations of hgvs would increase the risk of serious shunt accidents.

On a two-lane carriageway that could more easily cause complete blockage.

There was, too, the difficulty of enforcement — it would not be reasonable to expect the police to use scarce manpower to enforce restrictions unless they were convinced the restrictions were practicable and would bring about the desired improvement.

In this instance the Hertfordshire police would not support the proposal.