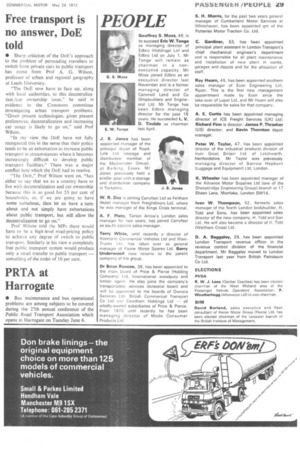 Page 31, 26th May 1972 — PEOPLE
Close
Noticed an error?
If you've noticed an error in this article please click here to report it so we can fix it.
Keywords : Business / Finance

W. R. Day is joining Carryfast Ltd as Feltham depot manager from Freightliners Ltd, where he was manager of the Kings Cross terminal.

Terry White, until recently a director of Normand Commercial Vehicles Ltd and MaxiTrucks Lt;.:, has taken over as general manager of Payne Motor Spares Ltd. Barry Underwood now returns to the parent company of the group.

Dr Brian Roscoe, 39, has been appointed to the main board of Price & Pierce (Holding Company) Ltd, International woodpulp and timber agent. He also joins the company's transportation services divisional board and will be appointed to the boards of Owners Services Ltd, British Commercial Transport Co Ltd and Cawthorn Holdings Ltd —• all wholly-owned subsidiaries of Price & Pierce. From 1970 until recently he has been managing director of Modo Consumer Products Ltd. S. H. Morris, for the past two years general manager of Cumberland Motor Services at VVhitehaven, has been appointed gm of the Potteries Motor Traction Co. Ltd.

C. Gardiner, 53. has been appointed principal plant assistant in London Transport's chief mechanical engineer's department and is responsible for all plant maintenance and installation of new plant in works, garages and depots and for the allocation of staff.

Ray Heam, 45, has been appointed southern sales manager of Econ Engineering Ltd, Ripon. This is the first new management appointment made by Econ since the take-over of Lupat Ltd, and Mr Hearn will also be responsible for sales for that company, A. E. Curtis has been appointed managing director of ICS Freight Services (UK) Ltd; Richard Finn is director: James P. Thrasher (US) director; and Kevin Thornton depot manager.

David Borland, sales executive and fleet consultant of Heron Motor Group (Fleets) Ltd, has been elected chairman of the Leicester branch of the British Institute of Management.