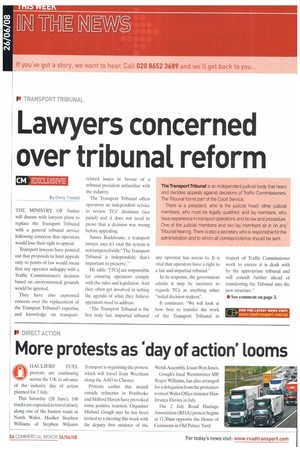 THE MINISTRY OF Justice will discuss with lawyers plans to replace the Transport Tribunal with a general tribunal service following concerns that operators would lose their right to appeal.

Transport lawyers have pointed out that proposals to limit appeals only to points of law would mean that any operator unhappy with a Traffic Commissioner's decision based on environmental grounds would be ignored.

They have also expressed concern over the replacement of the Transport Tribunal's expertise and knowledge on transport related issues in favour of a tribunal president unfamiliar with the industry.

The Transport Tribunal offers operators an independent service to review TCs' decisions (see panel) and it does not need to prove that a decision was wrong before appealing.

James Backhouse, a transport lawyer, says it's vital the system is not tampered with: "The Transport Tribunal is independent; that's important to preserve.

He adds: ITCs] are responsible for ensuring operators comply with the rules and legislation. And they often get involved in setting the agenda of what they believe operators need to address.

In its response, the government admits it may be incorrect to regards TCs as anything other "initial decision makers".

It continues: "We will look at how best to transfer the work of the Transport Tribunal in respect of Traffic Commissioner work to ensure it is dealt with by the appropriate tribunal and will consult further ahead of transferring the Tribunal into the new structure.