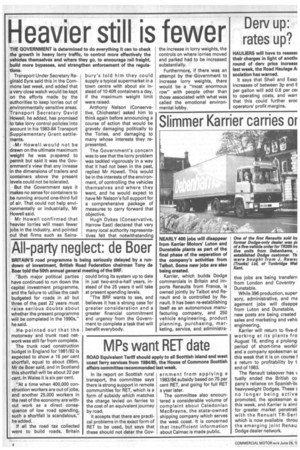 THE GOVERNMENT is determined to do everything it can to check the growth in heavy lorry traffic, to control more effectively the vehicles themselves and where they go, to encourage rail freight, build more bypasses, and strengthen enforcement of the regulations.

Transport Under Secretary Reginald Eyre said this in the Commons last week, and added that a very close watch would be kept on the efforts made by the authorities to keep lorries out of environmentally sensitive areas. Transport Secretary David Howell, he added, has promised to take lorry control policies into account in his 1983-84 Transport Supplementary Grant settlements.

Mr Howell would not be drawn on the ultimate maximum weight he was pi epared to permit but said it was the Government's view that any inrease in the dimensions of trailers and containers above the present levels could not be tolerated.

But the Government says it makes no sense for containers to be running around one-third full of air. That could not help environmentally or industrially, Mr Howell said.

Mr Howell confirmed that heavier lorries will mean fewer jobs in the industry, and pointed out that firms such as Sains bury's told him they could supply a typical supermarket in a town centre with about six instead of 10 40ft containers a day, if the maximum weight limit were raised.

Anthony Nelson (Conservative, Chichester) asked him to think again before announcing a course of action that would be gravely damaging politically to the Tories, and damaging to many whose interests they represented.

The Government's concern was to see that the lorry problem was tackled vigorously in a way that it had not been in the past, replied Mr Howell. This would be in the interests of the environment, of controlling the vehicles themselves and where they went, and he would expect to have Mr Nelson's full support for a comprehensive package of measures to carry forward that objective.

Hugh Dykes (Conservative, Harrow East) declared that very many local authority representatives felt that notwithstanding the increase in lorry weights, the controls on where lorries moved and parked had to be increased substantially.

Furthermore, if there was an attempt by the Government to increase lorry weights, there would be a "most enormous row" with people other than those associated with what was called the emotional environmental lobby.