Saved by one vote. . 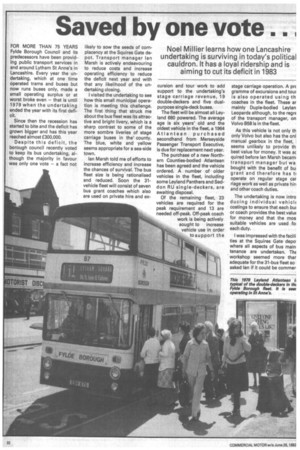 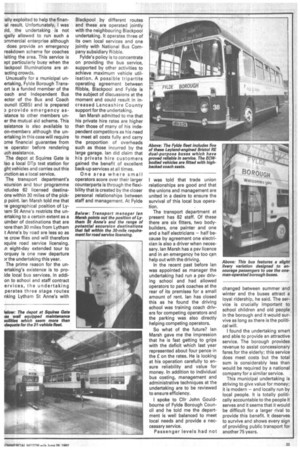 Page 22, 26th June 1982 — Saved by one vote. .
Close
Noticed an error?
If you've noticed an error in this article please click here to report it so we can fix it.
Keywords : Bus, Lytham St Annes, Squires Gate, Blackpool, Blackpool, Borough Of Fylde, Blackpool Transport

Noel Millier learns how one Lancashire undertaking is surviving in today's political cauldron. It has a loyal ridership and is aiming to cut its deficit in 1983

FOR MORE THAN 75 YEARS Fylde Borough Council and its predecessors have been providing public transport services in and around Lytham St Anne's in Lancashire. Every year the undertaking, which at one time operated trams and buses but now runs buses only, made a small operating surplus or at worst broke even — that is until 1979 when the undertaking ended the year with its first deficit.

Since then the recession has started to bite and the deficit has grown bigger and has this year reached almost £300,000.

Despite this deficit, the borough council recently voted to keep its bus undertaking, although the majority in favour was only one vote — a fact not likely to sow the seeds of complacency at the Squires Gate depot. Transport manager Ian Marsh is actively endeavouring to reduce costs and increase operating efficiency to reduce the deficit next year and with that any likelihood of the undertaking closing.

I visited the undertaking to see how this small municipal operation is meeting this challenge. The first thing that struck me about the bus fleet was its attractive and bright livery, which is a sharp contrast to some of the more sombre liveries of stage carriage buses in the' county. The blue, white and yellow seems appropriate for a sea-side town.

Ian Marsh told me of efforts to increase efficiency and increase the chances of survival. The bus fleet size is being rationalised and reduced. Soon the 31vehicle fleet will consist of seven bus grant coaches which also are used on private hire and ex

The fleet will be almost all Leyland 680 powered. The average age is six years' old and the oldest vehicle in the fleet, a 1964 Atlantean purchased secondhand from Merseyside Passenger Transport Executive, is due for replacement next year.

The purchase of a new Northern Counties-bodied Atlantean has been agreed and the vehicle ordered. A number of older vehicles in the fleet, including some Leyland Panthers and Seddon RU single-deckers, are awaiting disposal.

Of the remaining fleet, 23 vehicles are required for the peak requirement and 13 are needed off-peak. Off-peak coach work is being actively sought to increase vehicle use in order to support the stage carriage operation. A prc gramme of excursions and tow is also operated using th coaches in the fleet. These ar mainly Duple-bodied Leylan Leopards although, to the regr( of the transport manager, on Volvo B58 is in the fleet.

As this vehicle is not only th only Volvo but also has the onl manual gearbox in the fleet, seems unlikely to provide th best value for money. It was ac quired before Ian Marsh becam transport manager but wa bought with the benefit of bu, grant and therefore has ti operate on regular stage car riage work as well as private hin and other coach duties.

The undertaking is now intro ducing individual vehich costings to ensure that each bui or coach provides the best valul for money and that the mos suitable vehicles are used fo each duty.

I was impressed with the facili ties at the Squires Gate depo where all aspects of bus main tenance are undertaken. Th( workshop seemed more thar adequate for the 31-bus fleet so asked Ian if it could be commer ially exploited to help the finanial result. Unfortunately, I was )1d, the undertaking is not 'gaily allowed to run such a ommercial enterprise although does provide an emergency reakdown scheme for coaches isiting the area. This service is apt particularly busy when the lackpool Illuminations are at'acting crowds.

Unusually for a municipal unertaking, Fylde Borough Transort is a funded member of the • oach and Independent Bus ector of the Bus and Coach ouncil (CIBS) and is prepared o provide emergency asistance to other members uner the mutual aid scheme. This ssistance is also available to on-members although the unertaking in this case will require ome financial guarantee from le operator before rendering uch assistance.

The depot at Squires Gate is Iso a local DTp test station for ght vehicles and carries out this inction as a local service.

The transport department's xcursion and tour programme icludes 62 licensed destineons within 30 miles of the pick p point. Ian Marsh told me that geographical position of Lylam St Anne's restricts the unertaking to a certain extent as a umber of destinations that are lore than 30 miles from Lytham t Anne's by road are less so as le crow flies and will therefore 3quire road service licensing. Ln eight-day extended tour to orquay is one new departure )r the undertaking this year.

The prime reason for the unertaking's existence is to proide local bus services. In addion to school and staff contract ervices, the undertaking perates three stage routes nking Lytham St Anne's with Blackpool by different routes and these are operated jointly with the neighbouring Blackpool undertaking. It operates three of its own local services and one jointly with National Bus Company subsidiary Ribble.

Fylde's policy is to concentrate on providing the bus service, supported by other activities to achieve maximum vehicle utilisation. A possible tripartite operating agreement between Ribble, Blackpool and Fylde is the subject of discussions at the moment and could result in increased Lancashire County support for the undertaking.

Ian Marsh admitted to me that his private hire rates are higher than those of many of his independent competitors as his need to meet all costs fully and carry the proportion of overheads such as those incurred by the large garage. Ian did claim that his private hire customers gained the benefit of excellent back-up services at all times.

One area where small operators score over their larger counterparts is through the flexibility that is created by the closer personal relationships between staff and management. At Fylde I was told that trade union relationships are good and that the unions and management are united in a desire to ensure the survival of this local bus operation.

The transport department at present has 82 staff. Of these there are six fitters, two bodybuilders, one painter and one and a half electricians — half because by agreement one electrician is also a driver when necessary. Ian Marsh has a psv licence and in an emergency he too can help out with the driving.

So what of the future? Ian Marsh gave me the impression that he is fast getting to grips with the deficit which last year represented about four pence in the I on the rates. He is looking at his operation carefully to ensure reliability and value for money. In addition to individual bus costing, management and administrative techniques at the undertaking are to be reviewed to ensure efficiency.

I spoke to ClIr John Gouldbourne of Fylde Borough Council and he told me the department is well balanced to meet local needs and provide a neccessary service.

Passenger levels had not changed between summer and winter and the buses attract a loyal ridership, he said. The service is crucially important to school children and old people in the borough and it would survive as long as there is the political will.

I found the undertaking smart and able to provide an attractive service. The borough provides revenue to assist concessionary fares,for the elderly; this service does meet costs but the total sum is considerably less than would be required by a national company for a similar service.

This municipal undertaking is striving to give value for money; it is modern — and locally run by local people. It is totally politically accountable to the people it serves and it seems that it would be difficult for a larger rival to provide this benefit. It deserves to survive and shows every sign of providing public transport for another 75 years.