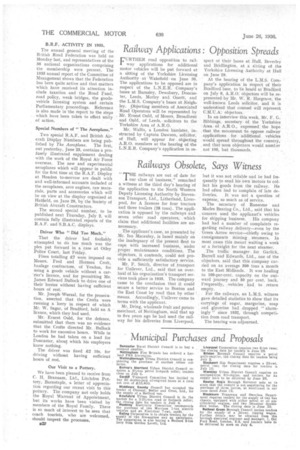 FURTHER road opposition to railway applications for additional motor vehicles will be put forward at a sitting of the Yorkshire Licensing Authority at Wakefield, on June 30. The applications to be opposed are in respect of the L.N.E.R. Company's bases at Barnsley, Dewsbury, Doncaster, Leeds, Morley and Ossett, and the L.M.S. Company's bases at Keighley. Objecting members of Associated Road Operators will be represented by Mr. Ernest Quid, of Messrs. Broadbent and Onld, of Leeds, solicitors to the Yorkshire Area of A.R.O.

Mr. Wallis, a London barrister, instructed by Captain Dawson, solicitor, of Hull, will appear for objecting A.R.O. members at the hearing of the L.N.E.R. Company's application in re spect ot their bases at Hull, Beverley and Bridlington, at a sitting of the Yorkshire Licensing Authority at Hull on June 29.

At the bearing of the L.M.S. Company's application in respect of their Bradford base, to be heaid at Bradfprd on July 9, A.1.(3.objectors will herepresented by Mr. W. 4.. Hargrave, the well-known Leeds solicitor, and it is •

In an interview this week, Mr. F. G. Bibbings, secretary of the Yorkshire Area of A.R.O., .expressed the hope that the movement. to, oppose. railway applications for Additional vehicles would spread throughout the country, and that soon objectors would numter not 100, but thousands.