Running the gauntlet to Northern Ireland 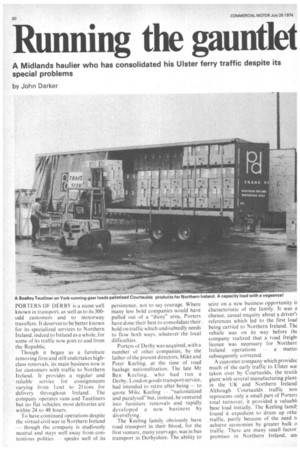 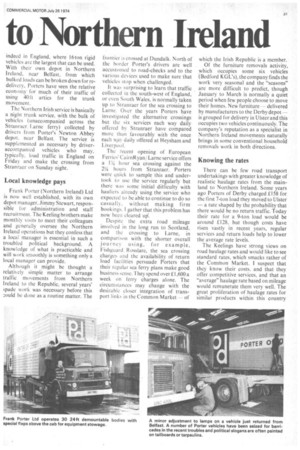 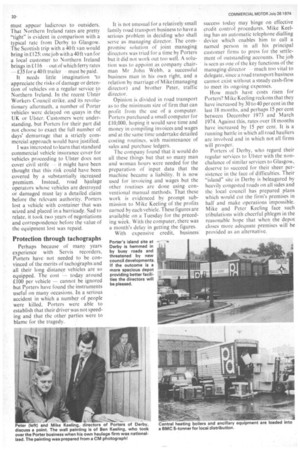 Page 34, 26th July 1974 — Running the gauntlet to Northern Ireland
Close
Noticed an error?
If you've noticed an error in this article please click here to report it so we can fix it.
Keywords : Geography Of Europe, Geography, Europe, Larne, Ireland, Porter, Stranraer, Belfast

by John Darker PORTERS OF DERBY is a name well known in transport, as well as to its.300odd customers and to motorway travellers. It deserves to be better known for its specialized services to Northern Ireland, indeed to Ireland as a whole, for some of its traffic now goes to and from the Republic.

Though it began as a furniture removing firm and still undertakes highclass removals, its main business now is for customers with traffic to Northern Ireland. It provides a regular and reliable service for consignments varying from I cwt to 21 tons for delivery throughout Ireland. The company operates vans and Tautliners but no flat vehicles; most deliveries are within 24 to 48 hours.

persistence, not to say courage. Where many less bold companies would have pulled out of a "dicey" area, Porters have done their best to consolidate their hold on traffic which undoubtedly needs to flow both ways, whatever the local difficulties.

Porters of Derby was acquired, with a number of other companies, by the father of the present directors, Mike and Peter Keeling, at the time of road haulage nationalization. The late Mr Ben Keeling. • who had run a Derby! London goods transport service, had intended to retire after being to quote Mike Keeling -• "nationalized and paralyse-d" but, instead, he ventured into furniture removals and rapidly developed a new business by diversifying.

The Keeling family obviously have road transport in their blood, for the first venture, many years ago, was in bus transport in Derbyshire. The ability to seize on a new business opportunity is characteristic of the family. It was a chance, 'casual enquiry about a driven references which led to the first load being carried to Northern Ireland. Tilt vehicle was on its way before th( company realized that a road freighi licence was necessary for Northert Ireland operations — a matte] subsequently corrected.

A customer company which provide( much of the early traffic to Ulster wa: taken over by Courtaulds, the textili giant with several manufacturing plant in the UK and Northern Ireland Although Courtaulds traffic nov represents only a small part of Porters total turnover, it provided a • valuabb base load initially. The Keeling fan* found it expedient to drum up othe traffic, partly because of the need t( achieve economies by greater bulk o traffic. There are many small factor: premises in Northern Ireland, an indeed in England, where 16 ton rigid vehicles are the largest that can be used. With their own depot in Northern Ireland, near Belfast, from which bulked loads can be broken down for redelivery, Porters have seen the relative economy for much of their traffic of using 4011 a rtics for the trunk movement.

The Northern Irish service is basically a night trunk service, with the bulk of vehicles (unaccompanied across the Stranraer; Larne ferry) collected by drivers from Porter's Newton Abbey depot. near Belfast. The service is supplemented as necessary by driveraccompanied vehicles who may, typically, load traffic in England on Friday and make the crossing from Stranraer on Sunday night.

Frank Porter (Northern Ireland) Ltd is now well established, with its own depot manager„limmy Stewart, responsible for administration and staff recruitment. The Keeling brothers make monthly visits to meet their colleagues and generally oversee the Northern Ireland operations but they confess that a local manager is essential in such a troubled political background. A knowledge of what is practicable and will work smoothly is something only a local manager can provide.

Although it might he thought a relatively simple matterto arrange traffic movements from Northern Ireland to the Republic, several years' spade work was necessary before this -could be done as a routine matter. The frontier is crossed at Dundalk. North of the border Porter's drivers are well accustomed to road-checks and to the various devices used to make sure that vehicles stop when challenged.

It was surprising to learn that traffic collected in the south-west of England, or even South Wales, is normally taken up to Stranraer for the sea crossing to Larne. Over the years Porters have investigated the alternative crossings but the six services each way daily offered by Stranraer have compared more than favourably with the once each way daily offered at Heysham and Liverpool.

The recent opening of European Ferries' CairnRyan/ Larne service offers a 13/4 hour sea. crossing against the 21/4 hours from Stranraer. Porters were quick to sample this and undertook to use the service regularly but there was some initial difficulty with hauliers already using the service who expected to be able to continue to do so casually, without making firm bookings. I gather that this problem has now been cleared u.

Despite the extra road mileage involved in the long run to Scotland, and the crossing to Larne, in comparison with the shorter overall journey using, for example, Fishguard, R osslare, the sea crossing charges and the availability of return load facilities persuade Porters that their regular sea ferry plans make good business sense. They spend over £1,600 a week on ferry charges alone. The circumstances may change with the desirable closer integration of transport links in the Common Market — of which the Irish Republic is a member.

Of the furniture removals activity, which occupies some six vehicles (Bedford KG L's), the company finds the work very seasonal and the "seasons" are more difficult to predict, though January to March is normally a quiet period when few people choose to move their homes. New furniture — delivered by manufacturers to the Derby depot is grouped for delivery in Ulster and this occupies two vehicles continuously. The company's reputation as a specialist in Northern Ireland movements naturally brings in some conventional household removals work in both directions.

There can be few road transport undertakings with greater knowledge of realistic haulage rates from the mainland to Northern Ireland. Some years ago Porters of Derby charged 158 for the first 7-ton load they moved to Ulster — a rate shaped by the probability that there would be no return traffic. Today their rate for a 9-ton load would be around £128. but though costs have risen vastly in recent years, regular services and return loads help to lower the average rate levels.

The Keelings have strong views on road haulage rates and would like to see standard rates, which smacks rather of the Common Market. I suspect that they know their costs. and that they offer competitive services, and that an "average" haulage rate based on mileage would remunerate them very well. The great proliferation of haulage rates for similar products within this country must appear ludicrous to outsiders. That Northern Ireland rates are pretty. "tight" is evident in comparison with a typical rate from Derby to Glasgow. The Scottish trip with a 40 ft van would bring in £125: one job with a 40 ft van for a local customer to Northern Ireland brings in LI 16 out of which ferry rates —£35 for a 40 ft trailer must be paid.

It needs little imagination 'to appreciate the risks of damage or detention of vehicles on a regular service to Northern Ireland. In the recent Ulster Workers Council strike, and its revolutionary aftermath, a number of Porter vehicles were delayed on quays in the UK or Ulster. Customers were understanding, but Porters for their part did not choose to exact the full number of days' demurrage that a strictly commercial approach would have justified.

I was interested to learn that standard commercial vehicle insurance cover for vehicles proceeding to Ulster does not .cover civil strife -it might have been thought that this risk could have been covered by a substantially increased premium. Instead, road haulage operators whose vehicles are destroyed or damaged must lay a detailed claim before the relevant authority. Porters lost a vehicle with container hat was seized and placed in a barricade. Sad to relate, it took two years of negotiations and correspondence before the value of the equipment lost was repaid.

Perhaps because of many years experience with Servis recorders, Porters have, not needed to be convinced of the merits of tachographs and all their long distance vehicles are so equipped. The cost — today around £100 per vehicle — cannot be ignored but Porters have found the instruments useful on many occasions. In a serious accident in which a number of people were killed, Porters were able to establish that their driver was not speeding and that the other parties were to blame for the tragedy. It is not unusual for a relatively small family road transport business to have a serious problem in deciding who shall serve as managing director. The compromise solution of joint managing directors was tried for a time by Porters but it did not work out too well. A solution was to appoint as company chairman Mr John Webb, a successful business man in his own right, and a relation by marriage of Mike (managing director) and brother Peter, traffic director.

Opinion is divided in road transport as to the minimum size of firm that can profit from the use of a computer. Porters purchased a small computer for £10,000, hoping it would save time and money in .compiling invoices and wages and at the same time undertake detailed costing routines, with maintenance of sales and purchase ledgers.

The company found that it would do all these things hut that so many man and woman hours were needed for the preparation of input data that the machine became a liability. It is now used for invoicing and wages hut the other routines are done using conventional manual methods. That these work is evidenced by prompt submission to Mike Keeling of the profits earned by each vehicle. These figures are available on a Tuesday for the preceding week. With the computer, there was a month's delay in getting the figures.

With expensive credit, business: success today may hinge on effective credit control procedures. Mike Keeling has an automatic telephone dialling device which enables him to call a named person in all his principal customer firms to press for the settlement of outstanding accounts. The job is seen as one of the key functions of the managing director much too vital to delegate, since a road transport business cannot exist without a steady cash-flow to meet its ongoing expenses.

How much have costs risen for Porters? Mike Keeling reckons that they have increased by 30 to 40 per cent in the last 18 months, and perhaps 15 per cent between December 1973 and March 1974. Against this, rates over 18 months have increased by 15 per cent. It is a running battle in which all road hauliers are involved and in which not all firms will prosper.

Porters of Derby, who regard their regular services to Ulster with the nonchalance of similar services to Glasgow, deserve to succeed for their sheer. persistence in the face of difficulties. Their "island" site in Derby is beleagured by heavily congested roads on all sides and the local council has prepared plans which would cut the firm's premises in half and make operations impossible. Mike and Peter Keeling face such tribulations with cheerful phlegm in the reasonable hope that when the depot closes more adequate premises will be provided as an alternative.