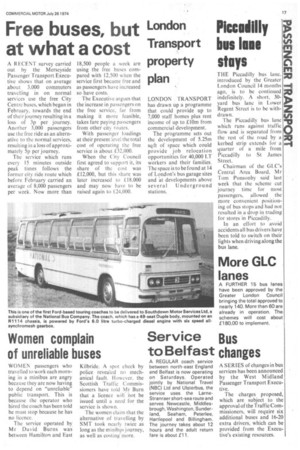 THE Piccadilly bus lane, introduced by the Greater London Council 14 months ago, is to be continued indefinitely. A short, 30yard bus lane in Lower Regent Street is to be withdrawn. • The Piccadilly bus lane which runs against traffic flow and is separated front the rest of the road by a kerbed strip extends for a quarter of a mile from Piccadilly to • St James Street.

Chairman of the GI.C's• Central Area Board, • Mr Tom Ponsonby said last week that the scheme cut journey time for most. passengers, allowed the More convenient positioning of bus stops and had not resulted in a drop in trading for stores in Piccadilly:

In an effort to avoid accidents all bus drivers have been told to switch on their lights when driving along the bus lane.