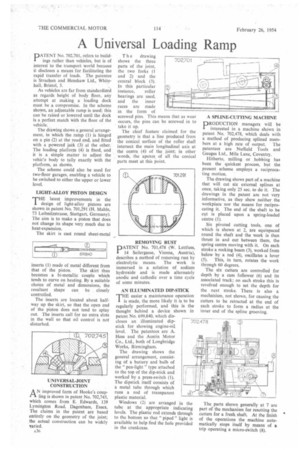 Page 62, 26th February 1954 — A Universal Loading Ramp
Close
Noticed an error?
If you've noticed an error in this article please click here to report it so we can fix it.
Keywords : Mechanical Engineering, Linkages, Piston, Crank

ings rather than vehicles, but is of interest to the transport world because it discloses a means for facilitating the rapid transfer of loads. The patentee is Strachan and Henshaw Ltd., Whitehall, Bristol, 5.

As vehicles are far from standardized as regards height of body floor, any attempt at making a loading dock must be a compromise. In the scheme shown, an adjustable ramp is used; this can be raised or lowered until the dock is a perfect match with the floor of the vehicle.

The drawing shows a general arrangement, in which the ramp (1) is hinged on a pin (2) at the road end, and fitted with a powered jack (3) at the other. The loading platform (4) is fixed, and it is a simple matter to adjust the vehiee body to tally exactly with the platform, as shown.

The scheme could also be used for two-floor garages, enabling a vehicle to be switched to either the upper or lower level.

THE latest improvements in the design of light-alloy pistons are shown in patent No. 701,291 (H. Mahle, 73 Leibnitzstrasse, Stuttgart, Germany). The aim is to make a piston that does not change its shape very much due to heat-expansion.

The skirt is cast round sheet-metal inserts (1) made of metal different from that of the piston. The skirt thus becomes a bi-metallic couple which tends to curve on heating. By a suitable choice of metal and dimensions, the resultant shape can be closely controlled.

The inserts are located about halfway up the skirt, so that the open end of the piston does not tend to splay out. The inserts call for no extra slots in the wall so that oil control is not 'disturbed.

AN improved form of Hooke's coupling is shown in patent No. 702,745, which comes from E. Edwards, 139 Lymington Road, Dagenham, Essex. The claims in the patent are based entirely on the geometry of the joint; the actual construction can be widely varied.

T h e drawing shows the three parts of the joint, the two forks (I and 2) and the central block (3). In this particular instance, roller bearings are used, and the inner races are made in the form of screwed pins. This means that as wear occurs, the pins can be screwed in to take it up.

The chief feature claimed for the geometry is that a line produced from the conical surface of the roller shall intersect the main longitudinal axis at the centre (4) of the joint; in other words, the apexes of all the conical parts meet at this point.

PATENT No. 701,478 (W. Lettfuss, 14 Seilergasse, Vienna, Austria), describes a method of removing rust by electrolytic means. The work is immersed in a solution of sodium hydroxide and is made alternately anodic and cathodic over a time cycle of some minutes.

AN ILLUMINATED DIP-STICK THE easier a maintenance operation I is made, the more likely it is to be i regularly performed, and this s the thought behind a device shown in patent No. 699,840, which discloses an illuminated dipstick for showing engine-oil level. The patentees arc A. Hess and the Austin Motor Co., Ltd., both of Longbridge Works, Birmingham.

The drawing shows the general arrangement, consisting of a battery and bulb of the " pen-light " type attached to the top of the dip-stick and worked by a press-switch (I). The dipstick itself consists of a metal tube through which runs a rod of transparent plastic material.

Windows (2) are arranged in the tube at the appropriate indicating levels. The plastic rod extends through to the bottom so that " piped " light is available to help find the hole provided in the crankcase. A SPLINE-CUTTING MACHINE

PRODUCTION managers will be interested in a machine shown in patent No. 702,478, which deals with a method of producing splined members at a high rate of output. The patentees are Nuffield Tools and Gauges Ltd., Mile Lane, Coventry.

Hitherto, mining or hobbing has been the quickest process, but the present scheme employs a reciprocating motion.

The drawing shows part of a machine that will cut six external splines at once, taking only 25 sec. to do it. The drawings in the patent are not very informative, as they show neither the workpiece nor the means for reciprocating it. The end of the shaft to be cut is placed upon a spring-loaded centre (1).

Six pivoted cutting tools, one of which is shown at 2, are equispaced round the shaft and the work is then thrust in and out between them, the spring centre moving with it. On each stroke a rocking beam (3), worked from below by a rod (4), oscillates a lever (5). This, in turn, rotates the work through 60 degrees.

The six cutters are controlled for depth by a cam follower (6) and its associated track; on each stroke this is revolved enough to set the depth for the next stroke. There is also a mechanism, not shown, for causing the cutters to be retracted at the end of each stroke to form a radius at the inner end of the spline grooving.

The parts shown generally at 7 are part of the mechanism for resetting the cutters for a fresh shaft. At the finish of the operations the machine automatically stops itself by means of a trip operating a micro-switch (8).