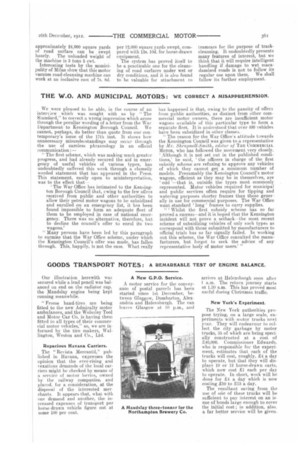 Page 5, 26th December 1912 — GOODS TRANSPORT NOTES: A REMARKABLE TEST
Close
Noticed an error?
If you've noticed an error in this article please click here to report it so we can fix it.

Our illustration herewith was secured while a lead pencil was balanced on end on the radiator cap, the Maudslay engine being kept running meanwhile.

"Frame band-tires are being fitted to the new Admiralty motor ambulances, and the Wolseley Tool and Motor Car Co. is having them fitted to all types of their commercial motor vehicles," so, we are informed by the tire makers, Wallington, Weston and Co., Ltd.

The " Revista -Mercantil," published in Havana, expresses the opinion that the ever-rising and vexatious demands of the local carriers might be checked by means of a service of motor lorries, owned by the railway companies, and placed, for a consideration, at the disposal of the interested merchants. It appears that, what with one demand and another, the increased expenses of transport per horse-drawn vehicle figure out at some 100 Per cent.

A motor service for the conveyance of postal parcels has been started since 1st December, between Glaegow, Dumbarton, Alexandria and Helensburgh. The van leaves Glasgow at 10 p.m., and

arrives at Helenshurgh soon after 1 a.m. The return journey starts at 1.30 a.m. This has proved most useful during Christmas traffic.

The New York authorities propose trying, on a large scale, experiments with motor trucks next year. They will endeavour to collect the city garbage by motor trucks, 35 of which are being specially constructed at a cost of £40,000. Commissioner Edwards, who is responsible, for the experiment, estimates that each of the trucks will cost, roughly, £4 a day to operate, but that they will displace 10 or 12 horse-drawn carts, which now cost El each per day to operate. In short, work will be done for £4 a day which is now costing..8•10 to S.!13 a day,

The -resultant saving from the use of one of these trucks will be sufficient to pay interest on an issue of bonds large enough to cover the initial cost ; in addition, also. a far better service will he given.