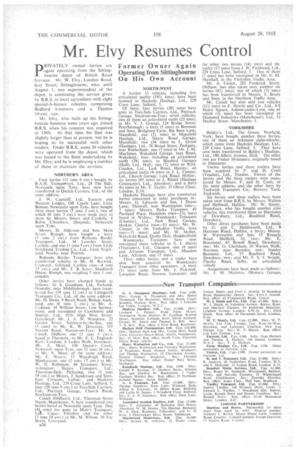 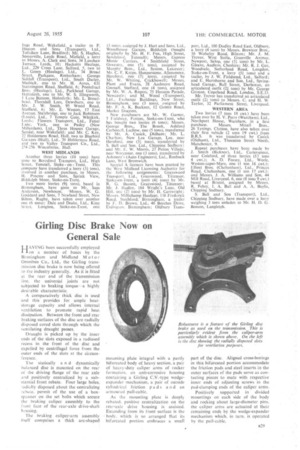 Former Owner Again Operating from Sittingbourne On His Own Account

pRIVATELY owned lorries are again operating from the Sittingbourne depot of British Road Services, Mr. W. Elvy, London Road, Key Street, Sittingbourne, who, until August 1, was superintendent of the depot. is continuing the service given by B.R.S. to local agriculture with eight special-A-licence vehicles, comprising Bedford 6-fonners and a Thames 10-cwt. van.

Mr. Elvy, who built up the Sittingbourne business some years ago, joined B.R.S. when his concern was acquired in 1949. At that time his fleet was slightly larger than at present, but he is hoping to be successful with other tenders. Under B.R.S., some 30 vehicles were operated from the depot, which was leased to the State undertaking by Mr. Elvy, and he is employing a number of these to maintain the services.

NORTHERN AREA Four lorries (13 tons 6 cwt.) bought by R.A.H.• Transporters, Ltd., 28 The Side, Newcastle upon Tyne, have now been transferred to Quelch Carriers, Ltd., of the same address,

J. W. Capstaff, Ltd., Eastern and Western Lodges, Off Coach Lane, Little Benton, Newcastle upon Tyne, have bought three more lorries (7 tons 2 cwt.), two of which (6 tons .3 cwt.) were made over to them by -Messrs. Smart and Cardella, 4 Baltic Chambers, Quayside, Newcastle upon-Tyne.

Three other lorries and a trailer have also been acquired by Woodcocks Fransport from other operators. A lorry (5; tons) came from Mr. J. Pickthall. Langdale Road, Newton, Lancaster, and the other two lorries (141 tons) and the trailer (17 tons) from J. W. Fieldsend, Ltd., 229 Cross Lane, Salford. 5. One of them (7 tons) has been reassigned to Mr. E. M. Marshall, its the Yorkshire Traffic Area.

Mr. A. Cusick, 282 Frederick Street, Oldham, has also taken over another six lorries (431 tons), one of which (71 tons) has been transferred to Messrs. T. Brady and Sons, in the Northern Traffic Area. Mr. Cusick has also sold two vehicles (111 tons) to E. Hewitt and Co., Ltd., 6-8 Henry Square, Ashton-under-Lyne. one of which (31 tons) has been reassigned to Diamond Industries (Manchester), Ltd., 53 Market Street. Manchester, 1.

YORKSHIRE Baldry's. Ltd., The Green, Newbald, York, have bought another three lorries, one of them an Atkinson eight-wheeler, which came from Hackett): Haulage, Ltd., 229 Cross !Lane, Salford. 5. They have now been transferred to Baldry's Haulage, Ltd„ 180 Albert Avenue, Hull. The other two are Foden 10-tonners, originally based at Doncaster. '

Six lorries and three trailers have been taken over from B.R.S. by Messrs. Walton and Helliwell. Halifax. Mr. W. Storey, Pontefract. who has bought another nine vehicles, has transferred them to Harrisons of Dewsbury, Ltd., Bradford Road, Dewsbury.

Assignments have been made as follows: Mr. J. M. MeInnes, Olymp:a Garage,