Whyte's do it again 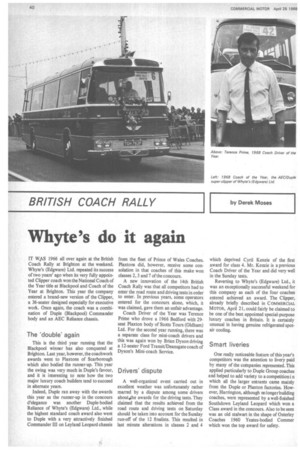 IT WAS 1966 all over again at the British Coach Rally at Brighton at the weekend. Whyte's (Edgware) Ltd. repeated its success of two years' ago when its very fully appointed Clipper coach won the National Coach of the Year title at Blackpool and Coach of the Year at Brighton. This year the company entered a brand-new version of the Clipper, a 36-seater designed especially for executive work. Once again, the coach was a combination of Duple (Blackpool) Commander body and an AEC Reliance chassis.

This is the third year running that the Blackpool winner has also conquered at Brighton. Last year, however, the coachwork awards went to Plaxtons of Scarborough which also bodied the runner-up. This year the swing was very much in Duple's favour, and it is interesting to note how the two major luxury coach builders tend to succeed in alternate years.

Indeed, Duple ran away with the awards this year as the runner-up in the concours d'elegance was another Duple-bodied Reliance of Whyte's (Edgware) Ltd., while the highest standard coach award also went to Duple with a very attractively finished Commander III on Leyland Leopard chassis from the fleet of Prince of Wales Coaches. Plaxtons did, however, receive some consolation in that coaches of this make won classes 2,3 and 7 of the concours.

A new innovation of the 14th British Coach Rally was that all competitors had to enter the road route and driving tests in order to enter. In previous years, some operators entered for the concours alone, which, it was claimed, gave them an unfair advantage.

Coach Driver of the Year was Terence Prime who drove a 1966 Bedford with 29seat Plaxton body of Stotts Tours (Oldham) Ltd. For the second year running, there was a separate class for mini-coach drivers and this was again won by Brian Dyson driving a 12-seater Ford Transit/Deansgate coach of Dyson's Mini-coach Service.

Drivers' dispute A well-organized event carried out in excellent weather was unfortunately rather marred by a dispute among some drivers aboutethe awards for the driving tests. They claimed that the results achieved from the road route and driving tests on Saturday should be taken into account for the Sunday run-off of the 12 finalists. This resulted in last minute alterations in classes 2 and 4

which deprived Cyril Kenzie of the first award for class 4. Mr. Kenzie is a previous Coach Driver of the Year and did very well in the Sunday tests.

Reverting to Whyte's (Edgware) Ltd., it was an exceptionally successful weekend for this company as each of the four coaches entered achieved an award. The Clipper, already briefly described in COMMERCIAL MOTOR, April 21, could fairly be claimed to be one of the best appointed special-purpose luxury coaches in Britain. It is certainly unusual in having genuine refrigerated spotair cooling.

One really noticeable feature of this year's competitors was the attention to livery paid by many of the companies represented. This applied particularly to Duple Group coaches and helped to add variety to a competition in which all the larger entrants came mainly from the Duple or Plaxton factories. However, Harrington, although rip longerbuilding coaches, were represented by a well-finished Southdown Leyland Leopard which won a Class award in the concours. Also to be seen was an old stalwart in the shape of Osterley Coaches 1960 Yeates-bodied Commer which won the top award for safety.