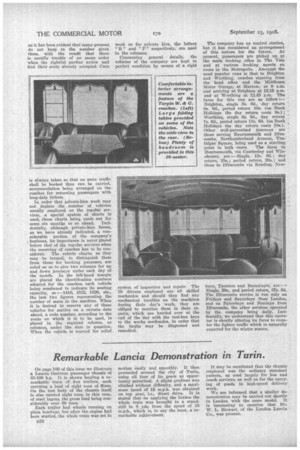 Page 10, 25th September 1928 — Remarkable Lancia Demonstration in Turin.
Close
Noticed an error?
If you've noticed an error in this article please click here to report it so we can fix it.

On page 189 of this issue we illustrate a Lancia Omicron passenger chassis of 85-100 h.p. It is shown hauling a remarkable train of five trailers, each carrying a load of eight tons of. flints. On the test body of the chassis itself is also carried eight tons, in this case, of steel ingots, the gross load being considerably over 50 tons.

Each trailer had wheels running on plain bearings, but after the.engine had been started, the whole train was set in motion easily and smoothly. It then proceeded around the city of Turin, using all four of its gears as opportunity permitted. A slight gradient was climbed without difficulty, and a maximum speed of 15 m.p.h. was obtained on top gear, i.e., direct drive. It is stated that on applying the brakes the whole train was brought to a standstill in 8 yds. from the speed of 15 m.p.h., which is, to say the least, a remarkable achievement. It may be mentioned that the chassis employed was the ordinary standard pattern, as used largely for bus and coach services, as well as for the carrying of goods in high-speed delivery work.

We are informed that a similar demonstration may be carried out shortly in London with the same model. It Is interesting to mention that Kr. W. L. Stewart, of the London Lancia' Co., was present.