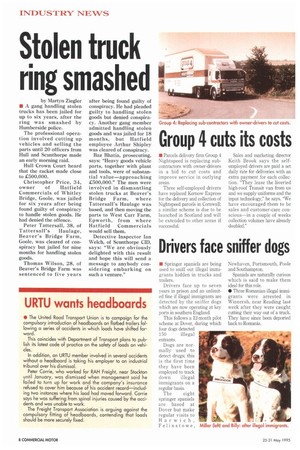 • The United Road Transport Union is to campaign for the compulsory introduction of headboards on flatbed trailers following a series of accidents in which loads have shifted forward.

This coincides with Department of Transport plans to publish its latest code of practice on the safely of loads on vehicles.

In addition, an URTU member involved in several accidents without a headboard is taking his employer to an industrial tribunal over his dismissal.

Peter Corrie, who worked for RAH Freight, near Stockton until January, was dismissed when management said he failed to turn up for work and the company's insurance refused to cover him because of his accident record—including two instances where his load had moved forward. Carrie says he was suffering from spinal injuries caused by the accidents and was unable to work.

The Freight Transport Association is arguing against the compulsory fitting of headboards, contending that loads should be more securely fixed.