'Save hgv's from WIZ 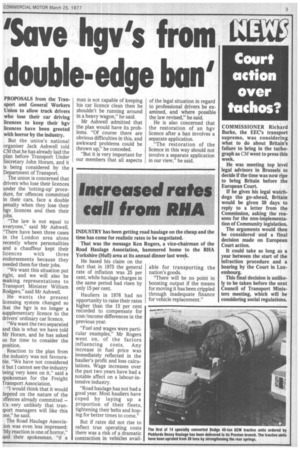 Page 5, 25th March 1977 — 'Save hgv's from WIZ
Close
Noticed an error?
If you've noticed an error in this article please click here to report it so we can fix it.
Keywords : Traffic Law, Personal Identification, Truck Driver, Truck, Driver's License

PROPOSALS from the Transport and General Workers Union to allow truck drivers who lose their car driving licences to keep their hgv licences have been greeted with horror by the industry.

But the union's national organiser Jack Ashwell told CM that he has already laid the plan before Transport Under Secretary John Horam, and it is being considered by the Department of Transport.

The union is concerned that drivers who lose their licences under the 'totting-up' procedure, for offences committed in their cars, face a double penalty when they lose their hgv licences and then their jobs.

"The law is not equal to everyone," said Mr Ashwell. "There have been three cases in the London area alone recently where personalities and a chauffeur kept their licences with three endorsements because they needed them for their jobs.

"We want this situation put right, and we will also be making representations to Transport Minister William Rodgers," said Mr Ashwell.

He wants the present licensing system changed so that the hgv is no longer a supplementary licence to the drivers' ordinary car licence.

"We want the two separated and this is what we have told Mr Horam, and he has asked us for time to consider the position.

Reaction to the plan from the industry was not favourable. "We have not considered it but 1 cannot see the industry being very keen on it," said a spokesman for the Freight Transport Association.

"I would think that it would lepend on the nature of the bffences already committed — it's very unlikely that transport managers will like this me," he said.

The Road Haulage Associa:ion was even less impressed: 'My reaction is one of horror," said their spokesman, "if a man is not capable of keeping his car licence clean then he shouldn't be running around in a heavy wagon," he said.

Mr Ashwell admitted that the plan would have its problems. "Of course there are obvious difficulties in this, and awkward problems could be thrown up," he conceded.

"But it is very important for our members that all aspects of the legal situation in regard to professional drivers be examined, and where possible the law revised," he said.

He is also concerned that the restoration of an hgv licence after a ban involves a separate application.

"The restoration of the licence in this way should not involve a separate application in our view," he said.