Fuel consumption contenders The battery of truck tests at this 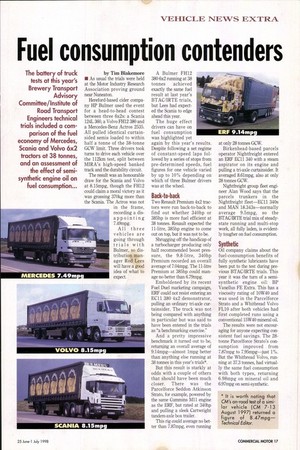 Page 19, 25th June 1998 — Fuel consumption contenders The battery of truck tests at this
Close
Noticed an error?
If you've noticed an error in this article please click here to report it so we can fix it.

year's Brewery Transport Advisory Committee/Institute of Road Transport Engineers technical trials included a comparison of the fuel economy of Mercedes, Scania and Volvo 6x2 tractors at 38 tonnes, and an assessment of the effect of semisynthetic engine oil on fuel consumption... by Tim Blakemore • As usual the trials were held at the Motor Industry Research Association proving ground near Nuneaton.

Hereford-based cider company HP Bulmer used the event for a head-to-head contest between three 6x2s: a Scania 124L 360, a Volvo FH12 380 and a Mercedes-Benz Actros 2535. All pulled identical curtainsided semis loaded to within half a tonne of the 38-tonne GCW limit. Three drivers took turns to drive each vehicle over the 112km test, split between MIRA's high-speed banked track and the durability circuit.

The result was an honourable draw for the Scania and Volvo at 8.15mpg, though the FH12 could claim a moral victory as it was grossing 370kg more than the Scania. The Actros was not in the frame, recording a disappointing 7.49mpg.

All three vehicles are going through trials with Bulmer, so distribution manager Rod Lees will have a good idea of what to expect. A Bulmer FH12 380 6x2 running at 38 tonnes achieved exactly the same fuel result at last year's BTAC/IRTE trials, but Lees had expected the Scania to edge ahead this year.

The huge effect drivers can have on fuel consumption was highlighted yet again by this year's results. Despite following a set regime of constant-speed laps followed by a series of stops from pre-determined speeds, fuel figures for one vehicle varied by up to 10% depending on which of three Bulmer drivers was at the wheel.

Back-to-back Two Renault Premium 4x2 tractors were run back-to-back to find out whether 340hp or 385hp is more fuel efficient at 38 tonnes. Renault expected the 11-litre, 385hp engine to come out on top, but it was not to be.

Shrugging off the handicap of a turbocharger producing only half recommended boost pressure, the 9.8-litre, 340hp Premium recorded an overall average of 7.04mpg. The 11-litre Premium at 385hp could manage no better than 6.79mpg.

Emboldened by its recent Fuel Duel marketing campaign, ERF could not resist entering an EC11 380 4x2 demonstrator, pulling an ordinary tri-axle curtainsider. The truck was not being compared with anything in particular but was said to have been entered in the trials as "a benchmarking exercise."

And a pretty impressive benchmark it turned out to be, returning an overall average of 9.14mpg—almost lmpg better than anything else running at 38 tonnes in this year's trials*.

But this result is starkly at odds with a couple of others that should have been much closer. There was the Parcelforce Seddon Atkinson Strato, for example, powered by the same Cummins Mll engine as the ERF, but rated at 340hp and pulling a sleek Cartwright tandem-axle box trailer.

This rig could average no better than 7.87mpg, even running at only 28 tonnes GCW.

Birkenhead-based parcels operator Nightfreight entered an ERF EC11 340 with a steam aspirator on its engine and pulling a tii-axle curtainsider. It averaged 8.61mpg, also at only 28 tonnes GCW.

Synthetic Oil company claims about the fuel-consumption benefits of fully synthetic lubricants have been put to the test during previous BTAC/IRTE trials. This year it was the turn of a semisynthetic engine oil: BP Vanellus FE Extra. This has a viscosity rating of 10W40 and was used in the Parcelforce Strato and a Whitbread Volvo FL10 after both vehicles had first completed runs using a conventional 15W40 mineral oil.

The results were not encouraging for anyone expecting consistent fuel savings. The 28tonne Parcelforce Strato's consumption improved from 7.87mpg to 7.95mpg—just 1%. But the Whitbread Volvo, running at 37.3 tonnes, had virtually the same fuel consumption with both types, returning 6.98mpg on mineral oil and 6.97mpg on semi-synthetic.