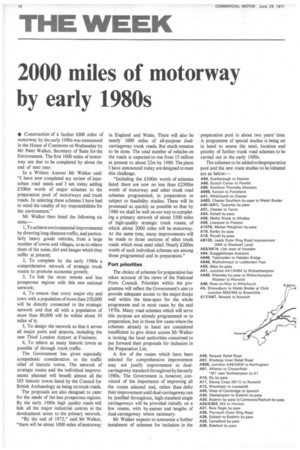 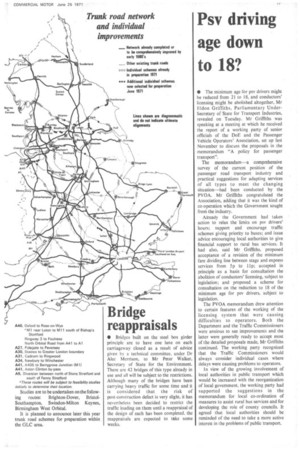 Page 18, 25th June 1971 — 2000 miles of motorway
Close
Noticed an error?
If you've noticed an error in this article please click here to report it so we can fix it.
Keywords : Roads In England, Trunk Road, A1 Road, Motorways In The Republic Of Ireland, A303 Road, A6 Road, A30 Road, Highways Agency

In a Written Answer Mr Walker said: "I have now completed my review of interurban road needs and I am today adding £500m worth of major schemes to the preparation pool of motorways and trunk roads. In selecting these schemes I have had in mind the totality of my responsibilities for the environment."

1, To achieve environmental improvements by diverting long-distance traffic, and particularly heavy goods vehicles, from a large number of towns and villages, so as to relieve them of the noise, dirt and danger which they suffer at present; 2, To complete by the early 1980s a comprehensive network of strategic trunk routes to promote economic growth; 3, To link the more remote and less prosperous regions with this new national network; 4, To ensure that every major city and town with a population of more than 250,000 will be directly connected to the strategic network and that all with a population of more than 80,000 will be within about 10 miles of it; 5, To design the network so that it serves all major ports and airports, including the new Third London Airport at Foulness; 6, To relieve as many historic towns as possible of through trunk traffic.

The Government has given especially sympathetic consideration to the traffic relief of historic towns. The network of strategic routes and the individual improvements planned will benefit almost all the 105 historic towns listed by the Council for British Archaeology as being on trunk roads.

The proposals are also designed to cater for the needs of the less prosperous regions. By the early 1980s high quality roads will link all the major industrial centres in the development areas to the primary network.

"By the end of 1972," said Mr Walker, "there will be about 1000 miles of motorway in England and Wales. There will also be nearly 1000 miles of all-purpose dualcarriageway trunk roads. But much remains to be done. The total number of vehicles on the roads is expected to rise from 15 million at present to about 22m by 1980. The plans I have announced today are designed to meet this challenge.

"Including the £500m worth of schemes listed there are now no less than £2300m worth of motorway and other trunk road schemes programmed, in preparation or subject to feasibility studies. These will be processed as quickly as possible so that by 1980 we shall be well on our way to completing a primary network of about 3500 miles of high-quality strategic trunk routes, of which about 2000 miles will be motorway. At the same time, many improvements will be made to those sections of other trunk roads which most need relief. Nearly £200m worth of such individual schemes are among those programmed and in preparation."

The choice of schemes for preparation has taken account of the views of the National Ports Council. Priorities within the programme will reflect the Government's aim to provide adequate access to the major docks well within the time-span for the whole programme and in most cases by the mid 1970s. Many road schemes which will serve this purpose are already programmed or in preparation, but in those few cases where the schemes already in hand are considered insufficient to give direct access Mr Walker is inviting the local authorities concerned to put forward their proposals for inclusion in the Preparation List.

Mr Walker expects to announce a further instalment of schemes for inclusion in the preparation pool in about two years' time. A programme of special studies is being set in hand to assess the need, location and priority of further trunk road schemes to be carried out in the early 1980s.

The schemes to be added to thepreparation pool and the new route studies to be initiated are as below:

A64. Scarborough to Staxton A66. Scotch Corner to Penrith A66, Stockton-Thornaby diversion A696, Kenton to Ponteland A41, Whitchurch to Chester A483, Chester Southern by-pass to Welsh Border A49 (A51), Tarporiey by-pass A51, Chester to Tarvin A54. Kelsall by-pass A59. Mellor Brook to Whalley A59. Liverpool to Preston A1079, Market Weighton by-pass A19. Barlby by-pass A19. Riccall by-pass A6120, Leeds Outer Ring Road improvement (A64 to Shadwell Lane) A63/A614, Link west of Howden A64, Scagglethorpe diversion A646. Todmorden to Hebden Bridge A646, Mytholmroyd to Luddenden Foot A65, Ilkley by-pass A41, Junction A41/A464 to Wolverhampton A449, Waresley by-pass to Wolverhampton Alcester to Warwick A49, Ross-on-Wye to Whitchurch A5, Shrewsbury to Welsh Border at Chirk Junction M54/M6 to Brownhills A17/A47, Newark to Norwich A46, Newark Relief Road A57, Worksop Inner Relief Road A606, Junction A46/A606 to Nottingham A61, Alfreton to Chesterfield *M1 near Northampton to Al A10, Ely by-pass All, Stump Cross (M11) to Norwich Al2, Wrentham to Lowestoft A45, West of Cambridge to Ipswich A30, Okehampton to Bodmin by-pass A30. Bodmin by-pass to Camborne/Redruth by-pass A30/A303, M3 to Honiton A31, Bere Regis by-pass A38, Plymouth Outer Ring Road A38, Saltash to Bodmin by-pass A39, Camelford by-pass A39. Bideford by-pass A40. Oxford to Ross-on-Wye *M1 near Luton to M11 south of Bishop's Stortford Ringway 3 to Foulness North Orbital Road from A41 to Al A27, Polegate to Pevensey A30. Staines to Greater London boundary

A34, Newbury to Winchester

A5. Diversion between north of Stony Stratford and

south of Fenny Stratford *These routes will be subject to feasibility studies initially to determine their location.

Studies are to be undertaken on the following routes: Brighton-Dover, BristolSouthampton, Swindon-Milton Keynes, Birmingham West Orbital.

It is planned to announce later this year trunk road schemes for preparation within the GLC area.