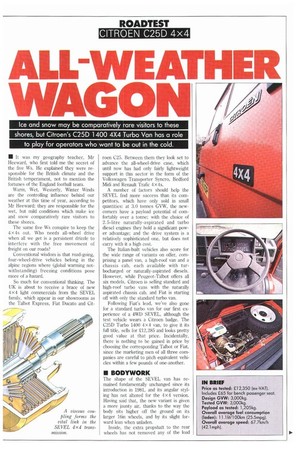 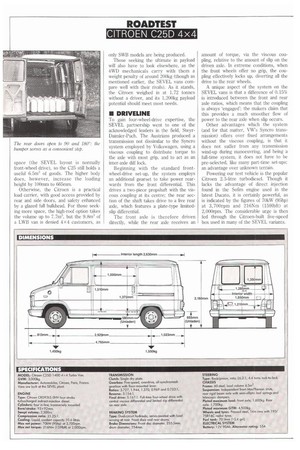 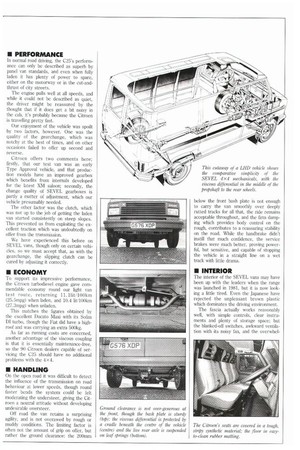 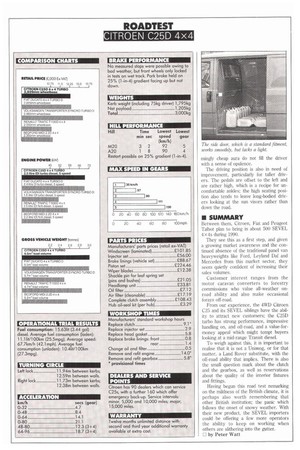 Ni It was my geography teacher, Mr Heeward, who first told me the secret of the five Ws. He explained they were responsible for the British climate and the British temperament, not to mention the fortunes of the England football team.

Warm, Wet, Westerly, Winter Winds are the controlling influence behind our weather at this time of year, according to Mr Heeward; they are responsible for the wet, but mild conditions which make ice and snow comparatively rare visitors to these shores.

The same five Ws conspire to keep the 4x4s out. Who needs all-wheel drive when all we get is a persistent drizzle to interfere with the free movement of freight on our roads?

Conventional wisdom is that road-going, four-wheel-drive vehicles belong in the alpine regions where (global warming notwithstanding) freezing conditions pose more of a hazard.

So much for conventional thinking. The UK is about to receive a brace of new 4x4 light commercials from the SEVEL family, which appear in our showrooms as the Talbot Express, Fiat Ducat° and

roen C25. Between them they look set to advance the all-wheel-drive case, which until now has had only fairly lightweight support in this sector in the form of the Volkswagen Transporter Syncro, Bedford Midi and Renault Trafic 4x4s.

A number of factors should help the SEVEL find more success than its competitors, which have only sold in small quantities: at 3.0 tonnes GVW, the newcomers have a payload potential of comfortably over a tonne; with the choice of 2.5-litre naturally-aspirated and turbo diesel engines they hold a significant power advantage; and the drive system is a relatively sophisticated one, but does not carry with it a high cost.

The Italian-built vehicles also score for the wide range of variants on offer, comprising a panel van, a high-roof van and a chassis cab, each available with turbocharged or naturally-aspirated diesels. However, while Peugeot-Talbot offers all six models, Citroen is selling standard and high-roof turbo vans with the naturally aspirated chassis cab, and Fiat is starting off with only the standard turbo van.

Following Fiat's lead, we've also gone for a standard turbo van for our first experience of a 4WD SEVEL, although the test vehicle wears a Citroen badge. The C25D Turbo 1400 4x4 van, to give it its full title, sells for ,212,285 and looks pretty good value at that price. Incidentally, there is nothing to be gained in price by choosing the corresponding Talbot or Fiat, since the marketing men of all three companies are careful to pitch equivalent vehicles within a few pounds of one-another.

The shape of the SEVEL van has remained fundamentally unchanged since its introduction in 1981, and its angular styling has not altered for the 4x4 version. Having said that, the new variant is given a more jaunty air, thanks to the way the body sits higher off the ground on its larger 16in wheels, and by its slight forward lean when unladen.

Inside, the extra propshatt to the rear wheels has not removed any of the load

space (the SEVEL layout is normally front-wheel drive), so the C25 still holds a useful 6.5m3 of goods. The higher body dues, however, increase the loading height by 100mm to 665mm.

Otherwise, the Citroen is a practical load carrier, with good access provided by rear and side doors, and safety enhanced by a glazed full bulkhead. For those seeking more space, the high-roof option takes the volume up to 7.7m3, but the 9.8m3 of a 1.WB van is denied 4x4 customers, as

only SWB models are being produced.

Those seeking the ultimate in payload will also have to look elsewhere, as the 4W1) mechanicals carry with them a weight penalty of around 200kg (though as mentioned earlier, the SEVEL vans compare well with their rivals). As it stands, the Citroen weighed in at 1.72 tonnes without a driver, and its 1,200kg payload potential should meet most needs.

To gain four-wheel-drive expertise, the SEVEL partnership went to one of the acknowledged leaders in the field, SteyrDaimler-Puch. The Austrians produced a transmission not dissimilar to the Syncro system employed by Volkswagen, using a viscous coupling to distribute torque to the axle with most grip, and to act as an inter-axle diff lock.

Beginning with the standard frontwheel-drive set-up, the system employs an additional gearset to take power rearwards from the front differential. This drives a two-piece propshaft with the viscous coupling at its centre; the rear section of the shaft takes drive to a live rear axle, which features a plate-type limitedslip differential.

The front axle is therefore driven directly, while the rear axle receives an amount of torque, via the viscous coupling, relative to the amount of slip on the driven axle. In extreme conditions, when the front wheels offer no grip, the coupling effectively locks up, diverting all the drive to the rear wheels.

A unique aspect of the system on the SEVEL vans is that a difference of 0.15% is introduced between the front and rear axle ratios, which means that the coupling is always 'engaged': the makers claim that this provides a much smoother flow of power to the rear axle when slip occurs.

Other advantages which the system (and for that matter, VW's Syncro transmission) offers over fixed arrangements without the viscous coupling, is that it does not suffer from any transmission wind-up during manoeuvring, and being a full-time system, it does not have to be pre-selected, like many part-time set-ups: an advantage over unknown terrain.

Powering our test vehicle is the popular Citroen 2.5-litre turbodiesel. Though it lacks the advantage of direct injection found in the Sofim engine used in the latest Ducat°, it is certainly powerful, as is indicated by the figures of 70kW (95hp) at 3,700rpm and 216Nm (1591bft) at 2,000rpm. The considerable urge is then fed through the Citroen-built five-speed box used in many of the SEVEL variants. In normal road driving, the C25's performance can only be described as superb by panel van standards, and even when fully Laden it has plenty of power to spare, either on the motorway or in the cut-andthrust of city streets.

The engine pulls well at all speeds, and while it could not be described as quiet, the driver might be reassured by the thought that if it does get a bit noisy in the cab, it's probably because the Citroen is travelling pretty fast.

Our enjoyment of the vehicle was spoilt by two factors, however. One was the quality of the gearchange, which was notchy at the best of times, and on other occasions failed to offer up second and reverse.

Citroen offers two comments here; firstly, that our test van was an early Type Approval vehicle, and that production models have an improved gearbox which benefits from internals developed for the latest XM saloon; secondly, the change quality of SEVEL gearboxes is partly a matter of adjustment, which our vehicle presumably needed.

The other factor was the clutch, which was not up to the job of getting the laden van started consistently on steep slopes. This prevented us from exploiting the excellent traction which was undoubtedly on offer from the transmission.

We have experienced this before on SEVEL vans, though only on certain vehicles, so we must accept that, as with the gearchange, the slipping clutch can be cured by adjusting it correctly.

This matches the figures obtained by the excellent Ducato Maxi with its Sofim DI turbo, though the Fiat did have a highroof and was carrying an extra 500kg.

As far as running costs are concerned, another advantage of the viscous coupling is that it is essentially maintenance-free, so the 90 Citroen dealers capable of servicing the C25 should have no additional problems with the 4x4.

On the open road it was difficult to detect the influence of the transmission on road behaviour at lower speeds, though round faster bends the system could be felt moderating the understeer, giving the Citroen a neutral attitude without developing undesirable oversteer.

Off road the van retains a surprising agility, and is not overawed by rough or muddy conditions. The limiting factor is often not the amount of grip on offer, but rather the ground clearance: the 200mm below the front bash plate is not enough to carry the van smoothly over deeply rutted tracks for all that, the ride remains acceptable throughout, and the firm damping which provides body control on the rough, contributes to a reassuring stability on the road. While the handbrake didn't instill that much confidence, the service brakes were much better, proving powerful, but sensitive, and capable of stopping the vehicle in a straight line on a wet track with little drama.

The interior of the SEVEL vans may have been up with the leaders when the range was launched in 1981, but it is now looking a little tired. Even the Japanese have rejected the unpleasant brown plastic which dominates the driving environment.

The fascia actually works reasonably well, with simple controls, clear instruments and plenty of storage space; but the blanked-off switches, awkward ventilation with its noisy fan, and the overwhel mingly cheap aura do not fill the driver with a sense of opulence.

The driving position is also in need of improvement, particularly for taller drivers. The pedals are offset to the left and are rather high, which is a recipe for uncomfortable ankles; the high seating position also tends to leave long-bodied drivers looking at the sun visors rather than down the road.

Between them, Citroen, Fiat and Peugeot Talbot plan to bring in about 500 SEVEL 4x4s during 1990.

They see this as a first step, and given a growing market awareness and the continued absence of the traditional panel van heavyweights like Ford, Leyland Daf and Mercedes from this market sector, they seem quietly confident of increasing their sales volumes.

From our experience, the 4WD Citroen C25 and its SEVEL siblings have the ability to attract new customers; the C25D turbo has strong performance, impressive handling on, and off-road, and a value-formoney appeal which might tempt buyers looking at a mid-range Transit diesel.

To weigh against this, it is important to realise that it is not a Unimog, or for that matter, a Land Rover substitute, with the off-road ability that implies. There is also the small question mark about the clutch and the gearbox, as well as reservations about the quality of the interior fixtures and fittings.

Having begun this road test remarking on the mildness of the British climate, it is perhaps also worth remembering that other British institution; the panic which follows the onset of snowy weather. With their new product, the SEVEL importers could be offering a few more operators the ability to keep on working when others are slithering into the gutter.