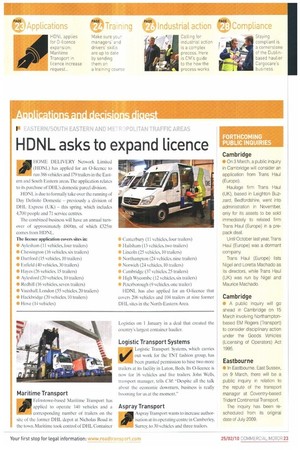 Page 23, 25th February 2010 — Cambridge
Close
Noticed an error?
If you've noticed an error in this article please click here to report it so we can fix it.
Keywords : Haulage, Bedfordshire, Public Inquiry, Eastbourne, Leighton Buzzard, Cambridge

* On 3 March, a public inquiry in Cambridge will consider an application from Trans Haul (Europe).

Haulage firm Trans Haul (UK), based in Leighton Buzzard, Bedfordshire, went into administration in November, only for its assets to be sold immediately to related firm Trans Haul (Europe) in a prepack deal.

Trans Haul (Europe) lists Nigel and Loretta Machado as its directors. while Trans Haul (UK) was run by Nigel and Maurice Machado.

• A public inquiry will go ahead in Cambridge on 15 March involving Northamptonbased EM Rogers (Transport) to consider disciplinary action under the Goods Vehicles (Licensing of Operators) Act 1995.

• In Eastbourne, East Sussex, on 9 March, there will be a public inquiry In relation to the repute of the transport manager at Coventry-based Trident Continental Transport.

The inquiry has been rescheduled from its original date of July 2009.