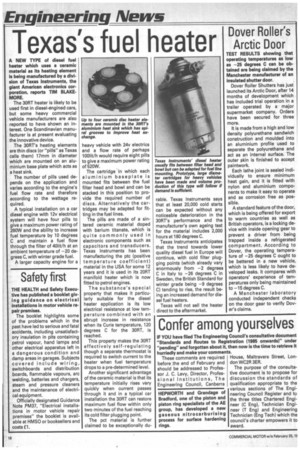 A NEW TYPE of diesel fuel heater which uses a ceramic material as its heating element is being manufactured by a division of Texas Instruments, the giant American electronics corporation, reports TIM BLAKEMORE.

The 3ORT heater is likely to be used first in diesel-engined cars, but some heavy commercial vehicle manufacturers are also reported to have shown an interest. One Scandinavian manufacturer is at present evaluating the innovative device.

The 3ORT's heating elements are thin discs (or "pills" as Texas calls them) 17mm in diameter which are mounted on an aluminium base plate which acts as a heat sink, The number of pills used depends on the application and varies according to the engine's fuel flow rate and therefore according to the wattage required.

A typical installation on a car diesel engine with 12v electrical system will have four pills to give a maximum power rating of 260W and the ability to increase fuel temperature by 10 degrees C and maintain a fuel flow through the filter of 401it/h at an ambient temperature of —20 degrees C, with winter grade fuel.

A larger capacity engine for a heavy vehicle with 24v electrics and a flow rate of perhaps 100lit/h would require eight pills to give a maximum power rating of 520W.

The cartridge in which each aluminium baseplate is mounted fits between the fuel filter head and bowl and can be stacked in this position to provide the required number of discs. Alternatively the cartridges may be adapted for fitting in the fuel lines.

The pills are made of a sintered ceramic material doped with barium titanate, which is quite commonly used in electronic components such as capacitors and transducers. Texas Instruments has been manufacturing the ptc (positive temperature coefficient) material in the USA for some 12 years and it is used in its 2ORT manifold heater which is now fitted to petrol engines.

The substance's special property that makes it particularly suitable for the diesel heater application is its low electrical resistance at low temperature combined with an abrupt increase in resistance when its Curie temperature, 120 degrees C for the 3ORT, is reached.

This property makes the 3ORT effectively self-regulating though a separate thermostat is required to switch current to the heater when fuel temperature drops to a pre-determined level.

Another significant advantage of the ceramic material is that its temperature initially rises very quickly when current passes through it and in a typical car installation the 3ORT can restore maximum fuel flow within only two minutes of the fuel reaching its cold filter plugging point.

The pct material is further claimed to be exceptionally du rable. Texas Instruments says that at least 20,000 cold starts can be expected without any noticeable deterioration in the 3ORT's performance and the manufacturer's own ageing test for the material includes 2,000 hours at 180 degrees C.

Texas Instruments anticipates that the trend towards lower quality diesel fuel in Europe will continue, with cold filter plugging points (which already vary enormously from —2 degrees C in Italy to —26 degrees C in Sweden, the British Standard for winter grade being —9 degrees C) tending to rise, the result being an increased demand for diesel fuel heaters.

Texas will not sell the heater direct to the aftermarket.