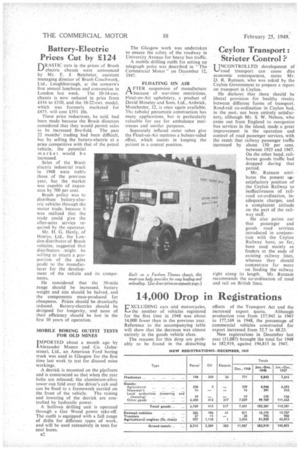 DRAST1C cuts in the prices of Brush electric chassis were announced by Mr. E. J. Batchelor, assistant managing director of Brush Coachwork, Ltd., Loughborough, at the concern's first annual luncheon and convention in London last week. The 10-14-cwt. chassis is now reduced in price from £416 to £310, and the 18-22-cwt. model, which was formerly marketed for £475, will cost £351 10s.

These price reductions, he said, had been made because the Brush directors considered that they would permit sales to be increased five-fold. The past 22 months' trading had been difficult, but by selling the battery-electric at a price competitive with that of the petrol vehicle, the potential market would be increased.

Sales of the Brush electric industrial truck in 1948 were treble those of the previous year, but the market was capable of expansion by 700 per cent.

Brush policy was to distribute battery-electric vehicles through the motor trade, because it was realized that the trade could give the after-sales service required by the operator.

Mr. H. G. Henly, of Henlys, Ltd.. the London distributor of Brush vehicles, suggested that distributors -might be willing to return a proportion of the sales profit to the manufacturer for the development of the vehicle and nents.

He considered that the 30-mile range should be increased, battery weight and size should be 'halved, and the components mass-produced for cheapness. Prices should be drastically reduced. Battery-electrics should be designed for longevity, and none of their efficiency should be lost in the first 10 years of operation.

IMPORTED about a month ago by ',Alexander Munro and Co. (Johnstone), Ltd., an American Ford boring truck was used in GlasgOw for the first time last week to test for disused mine workings.

A derrick is mounted on the platform and is constructed so that when the rear bolts are released, the aluminium-alloy tower can fold over the driver's cab and can be fixed to a framework carried on the front of the vehicle. The raising and lowering of the derrick are controlled by hydraulic power.

A Sullivan drilling unit is operated through a Gar Wood power take-off. The outfit is equipped with a full range of drills for different types of work, and will be used extensively in tests for coal bores.

a2 The Glasgow work was undertaken to ensure the safety of the roadway in University Avenue for heavy bust traffic.

A mobile drilling outfit for setting up telegraph poles was described in " The Commercial Motor" on December 12, 1947.

AFTER suspension of manufacture because of war-time restrictions, Float-on-Air upholstery, a product of David Moseley and Sons, Ltd., Ardwick, Manchester, 12, is once again available. Thz tubular pneumatic construction has many applications, but is particularly valuable for use for ambulance mattresses and similar purposes.

Separately inflated outer tubes give the Float-on-Air mattress a bolster-sided effect, which assists in keeping the patient in a central position.