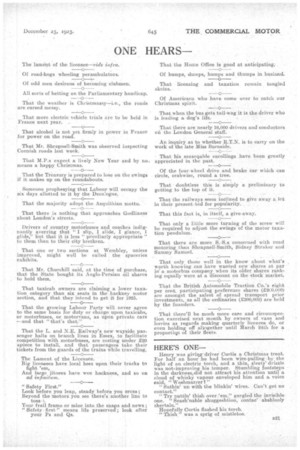 Page 3, 25th December 1923 — ONE HEARS
Close
Noticed an error?
If you've noticed an error in this article please click here to report it so we can fix it.
Keywords : Henry Jones Shrapnell, Tax, Thurible

The lame*, of the licensee-14de infra.

All sorts of betting on the Parliamentary handicap.

That the weather is Christmassy—i.e., the roads are cursed messy.

That more electric vehicle trials are to he held in France next year.

That alcohol is not yet firmly in power in France for power on the road.

That MPs expect a lively New Year and by no. means a happy Christmas.

That the Treasury is prepared to lose on the swings if it makes up on the roundabouts.

Someone prophesying that Labour will occupy the six days allotted to it by the Decalogue.

That the majority adopt the Asquithian motto.

That there is nothing that approaches Godliness about London's streets.

Drivers of country motorbuses and coaches indignantly averring that " I slip, I slide, I glance, 1 glide, but that it is less " peculiarly appropriate " to them than to their city brethren.

That one or two sections at Wembley, unless improved, might well be called . the spaceries exhibits.

That Mr. Churchill said, at the time of purchase, that the State bought its Anglo-Persian oil shares to hold them.

. That taxicab owners are claiming a lower taxation category than six seats in the hackney motor section, and that they intend to get it for 1925.

That the growing Labour Party will never agree to the same basis for duty or charge upon taxicabs, or motorbuses, or. motorvans; as upon private ears —wad that "that's that." • That the L. and N.M. Railway's new wayside passenger halts on branch lines in Essex, to facilitate competition with motorbuses, are costing under 220 apiece to install, and that passengers take their tickets from the guards of the trains while travelling.

The Lament of the Licensee.

Big licensees have local hees upon their tracks to fight 'em, And large jitnees have wee hacknees, and so on ad infinitum.

" Safety First." Look before you leap, steady before you cross; Beyond the Motori you see there's another line to toss Your frail frame Or mine into the snaps and news ; " Safety first" means life preserved"; look after your Ps and Qs. That the Home Office is good at anticipating.

Of bumps, dumps., humps and thumps in buslancL That licensing and taxation remain tangled skeins.

Of Americana who have come over to catch our Christmas spirit.

That when the bus gets tail-wag it is the driver who is leading a dog's life.

That there are nearly 16,000 drivers and condu.ctors on the London General staff.

An inquiry as to whether R.T.N. is to carry on the work of the late Miss Burnside.

That his seasonable carollings have been greatly appreciated in the past.

Of the four-wheel drive and brake car which can circle, crabwise, round a tree.

That doubtless this is simply a preliminary to getting to the top of it.

That the railways seem inclined to give away a lot in their present bid for popularity.

That this fact is, in itself, a give-away.

That only a little more turning of the screw will be required to adjust the swings of the motor taxation pendulum.

That there are MGM S.-S.s concerned with road motoring than Shrapnell-Smith, Sidney Straker and Sammy Samuel.

That only those well in the know about what's worth knowing can have wanted new shares at par in a motorbus company when its older, shares ranking equally were at a 'discount on the stock market.

That the British Anton-labile Traction Co.'s eight per cent. participating preference shares (220,000) are amongst the safest of spread transport prior investmenta, as all the ordinaries (2300,000) are hold by the founders.

That there'll be much more care and circumspection exercised next month by owners of vans and lorries as regards making quarterly licences do, or even holding off algether until March 24th for a proportioi of their fleets.