ITIE IRISH Republic is setting up a Road Safety Authority whose role will include improving safety in road haulage. 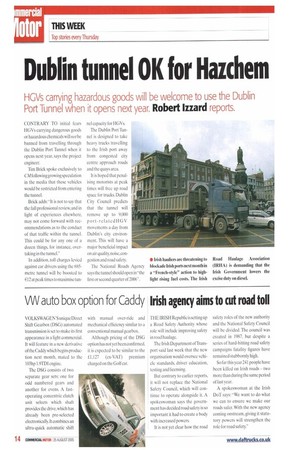 Page 14, 25th August 2005 — ITIE IRISH Republic is setting up a Road Safety Authority whose role will include improving safety in road haulage.
Close
Noticed an error?
If you've noticed an error in this article please click here to report it so we can fix it.

But contrary to earlier reports, it will not replace the National Safety Council, which will continue to operate alongside it. A spokeswoman says the government has decided road safety is so important it had to create a body with increased powers.

It is not yet clear how the road safety roles of the new authority and the National Safety Council will be divided. The council was created in 1987, hut despite a series of hard-hitting road safety campaigns fatality figures have remained stubbornly high.

So far this year 241 people have been killed on Irish roads — two more than during the same period of last year.

A spokeswoman at the Irish DoT says: "We want to do what we can to ensure we make our roads safer. With the new agency coming onstream, giving it statutory powers will strengthen the role for road safety."