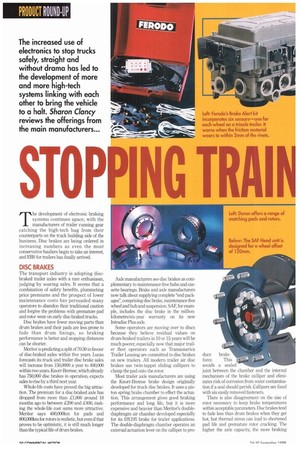 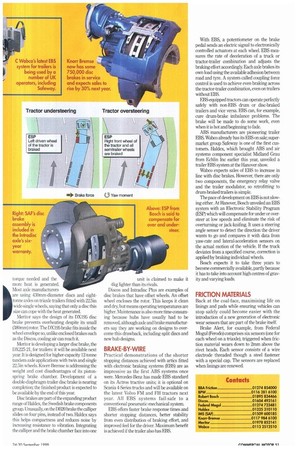 The increased use of electronics to stop trucks safely, straight and without drama has led to the development of more and more high-tech systems linking with each other to bring the vehicle to a halt. Sharon Clancy reviews the offerings from the main manufacturers...

The development of electronic braking systems continues apace, with the manufacturers of trailer running gear catching the high-tech bug from their counterparts on the truck building side of the business. Disc brakes are being ordered in increasing numbers as even the most conservative hauliers begin to take an interest, and EPS for trailers has finally arrived.

The transport industry is adopting discbraked trailer axles with a rare enthusiasm, judging by soaring sales. It seems that a combination of safety benefits, plummeting price premiums and the prospect of lower maintenance costs has persuaded many operators to abandon their traditional caution and forgive the problems with premature pad and rotor wear on early disc-braked trucks.

Disc brakes have fewer moving parts than drum brakes and their pads are less prone to fade than drum linings, so braking performance is better and stopping distances can be shorter.

Mentor is predicting a split of 70:30 in favour of disc-braked axles within five years. Lucas forecasts its truck and trailer disc brake sales will increase from 150,0000 a year to 400,000 within two years. Knorr-Bremse, which already has 750,000 disc brakes in operation, expects sales to rise by a third next year.

Whole-life costs have proved the big attraction. The premium for a disc-braked axle has dropped from more than £1,000 around 18 months ago to between £200 and £400, making the whole-life cost sums more attractive. Mentor says 400,000km for pads and 800,000km for rotors is realistic, but even if that proves to be optimistic, it is still much longer than the typical life of drum brakes.

Some operators are moving over to discs because they believe residual values on drum-braked trailers in 10 or 15 years will be much poorer, especially now that major trailer fleet operators such as Transamerica Trailer Leasing are committed to disc brakes on new trailers. All modern trailer air disc brakes use twin-tappet sliding callipers to clamp the pad onto the rotor.

Most trailer axle manufacturers are using the Knorr-Bremse brake design originally developed for truck disc brakes. It uses a piston spring brake chamber to effect the actuation. This arrangement gives good braking performance and long life, but it is more expensive and heavier than Mentor's doublediaphragm air chamber developed especially for its DX195 brake for trailer applications. The double-diaphragm chamber operates an external actuation lever on the calliper to pro duce brake force. This avoids a sealed joint between the chamber and the internal mechanism of the brake calliper and eliminates risk of corrosion from water contamination if a seal should perish. Callipers are fixed with six easily removed fasteners.

There is also disagreement on the size of rotor necessary to keep brake temperatures within acceptable parameters. Disc brakes tend to fade less than drum brakes when they get hot, but thermal stress can lead to shortened pad life and premature rotor cracking. The higher the axle capacity, the more braking torque needed and the more heat is generated.

IMost axle manufacturers are using 430mm-diameter discs and eighttonne axles on triaxle trailers fitted with 22.5in wide-single wheels, saying that only a disc this size can cope with the heat generated. Mentor says the design of its DX195 disc brake prevents overheating despite its small (380mm) rotor. The DX195 brake fits inside the wheel envelope so, unlike enclosed brakes such as the Discos, cooling air can reach it

Mentor is developing a larger disc brake, the DX225-21, for trailers: it will be available next year. It is designed for higher-capacity 12-tonne tandem-axle applications with twin and single 22.5in wheels. Knorr-Bremse is addressing the weight and cost disadvantages of its pistonspring brake chamber. Development of a double-diaphragm trailer disc brake is nearing completion; the finished product is expected to be available by the end of this year.

Disc brakes are part of the expanding product range of Haldex, the Swedish brake components group. Unusually, on the DB20 brake the calliper slides on four pins, instead of two. Haldex says this helps compactness and reduces noise by increasing resistance to vibration. Integrating the calliper and the brake chamber face into one

unit is claimed to make it 4kg lighter than its rivals.

Discos and Intradisc Plus are examples of disc brakes that have offset wheels An offset wheel encloses the rotor. This keeps it clean and dry, but means operating temperatures are higher. Maintenance is also more time-consuming because hubs have usually had to be removed, although axle and brake manufacturers say they are working on designs to overcome this drawback, including split discs and new hub designs.

Practical demonstrations of the shorter stopping distances achieved with attics fitted with electronic braking systems (EBS) are as impressive as the first ABS systems once were. Mercedes-Benz has made EBS standard on its Actros tractive units; it is optional on Scartia 4-Series trucks and will be available on the latest Volvo FM and FU tractors next year. All EBS systems fail-safe to a conventional pneumatic-mechanical system.

EBS offers faster brake response times and shorter stopping distances, better stability from even distribution of braking effort, and improved feel for the driver. Maximum benefit is achieved if the trailer also has EBS.

With EBS, a potentiometer on the brake pedal sends an electric signal to electronically controlled actuators at each wheel. EBS measures the rate of deceleration of a truck or tractor-trailer combination and adjusts the braking effort accordingly. Each axle brakes its own load using the available adhesion between road and tyre. A system called coupling force control is used to achieve even braking across the tractor-trailer combination, even on trailers without EBS.

EBS-equipped tractors can operate perfectly safely with non-EBS drum or disc-braked trailers and vice versa. EBS can, for example, cure drum-brake imbalance problems. The brake will be made to do some work, even when it is hot and beginning to fade.

ABS manufacturers are pioneering trailer EBS. Wabco already has its EBS on sale; supermarket group Safeway is one of the first customers. flaIdex, which brought ABS and air systems component specialist Midland Gran from Echlin Inc earlier this year, unveiled a trailer EBS system at the Hanover show.

Wabco expects sales of EBS to increase in line with disc brakes. However, there are only two components, the emergency relay valve and the trailer modulator, so retrofitting to drum-braked trailers is simple.

The pace of development on EBS is not slowing either. At Hanover, Bosch unveiled an EBS system with an Electronic Stability Program (ESP) which will compensate for under or oversteer at low speeds and eliminate the risk of overturning or jack-knifing. It uses a steering angle sensor to detect the direction the driver wants to go and compares it with data from yaw-rate and lateral-acceleration sensors on the actual motion of the vehicle. If the truck deviates from a specified course, correction is applied by braking individual wheels.

Bosch expects it to take three years to become commercially available, partly because it has to Lake into account high centres of gravity and varying loads.

Back at the coal-face, maximising life on linings and pads while ensuring vehicles can stop safely could become easier with the introduction of a new generation of electronic wear sensors that are part of the brake itself Brake Alert, for example, from Federal Mogul (Ferodo) comprises six sensors (one for each wheel on a triaxle), triggered when friction material wears down to 2mm above the rivet heads. Each sensor consists of a wire electrode threaded though a steel fastener with a special cap. The sensors are replaced when linings are renewed.