The Prowodnik Works at Riga. 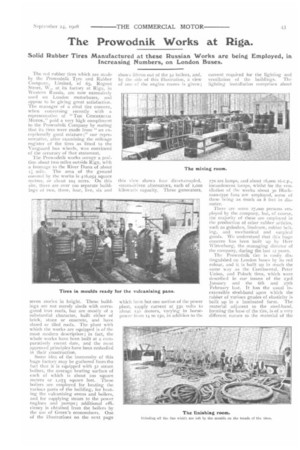 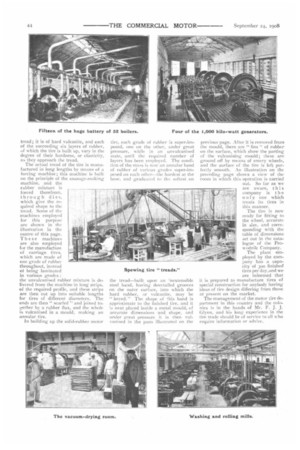 Page 3, 24th September 1908 — The Prowodnik Works at Riga.
Close
Noticed an error?
If you've noticed an error in this article please click here to report it so we can fix it.
Keywords : Tires, Tire, Vulcanization, Tread, Tire Manufacturing, Tire Recycling

Solid Rubber Tires Manufactured at these Russian Works are being Employed, in Increasing Numbers, on London Buses.

The red rubber tires which are made by the Prowodnik Tyre and Rubber Company, Limited, of 63, Regent Street, W., at its factory at Riga, in Western Russia, are now extensively used on London motorbuses, and appear to be giving great satisfaction. The manager of a rival tire concern, when conversing recently with a representative of " THE COMMERCIAL MOTOR," paid a very high compliment to the Prowodnik Company by stating that its tires were made from " an exceptionally good mixture ;" our representative, after examining the mileage register of the tires as fitted to the Vanguard bus wheels, was convinced of the accuracy of that statement.

The I'rowednik work. s occupy a position about two miles outside Riga, with a frontage to the River Duna of about mile. The area of the ground covered by the works is 416,054 square metres, or about 104 acres. On this site, there are over too separate buildings of two, three, four, five, six and

seven stories in height. These buildings are not merely sheds with corrugated iron roofs, but are mostly of a substantial character, built either of brick, stone or concrete, and have slated or tiled roofs. The plant with which the works are equipped is of the most modern description ; in fact, the whole works have been built at a comparatively recent date, and the most approved principles have been embodied in their construction.

Some idea of the immensity of this huge factory may be gathered from the fact that it is equipped with 52 steam boilers, the average heating surface of each of which is about too square metres or 1,075 square feet. These boilers are employed for heating the various parts of the building, for heating the vulcanising ovens and boilers, and for supplying steam to the power engines and pumps; additional efficiency is obtained from the boilers by the use of Green's economisers. One of the illustrations on the next page shows fifteen out of the 52 boilers, and, by the side of this illustration, a view of one of the engine rooms is given ; this view shows four diNct-coupled, steam-driven alternators, each of ',coo kilowatts capacity. These generators,

which form but one section of the power plant, supply current at 550 volts Lu about 15o motors, varying in horsepower from 14 to 150, in addition to the

current required for the lighting and ventilation of the buildings. The lighting installation comprises about 170 are lamps, and about t6,00ta incandescent lamps, whilst for the ventilation of the works about 30 I3lackman-type fans are employed, some of these being as much as 8 feet in diameter.

There are sonic 27,000 persons employed by the company, but, of course, the majority of these are employed in the production of other rubber articles, such as goloshes, linoleum, rubber belting, and mechanical and surgical goods. We understand that this huge concern has been built up by Herr Wittenburg, the managing director of the company, during the last 12 years.

The Prowodnik tire is eashv distinguished on London buses by its red colour, and it is built up in much the same way as the Continental, Peter Union, and Polack tires, which were described in our issues of the 23rd January and the 6th and 27th February last. it has the usual inextensible steel-hand upon which the rubber of various grades of elasticity is built up in a laminated form. The material adjacent to the steel-band, forming the base of the tire, is of a very different nature to the material of the

tread; it is of hard vulcanite, and each of the succeeding six layers of rubber, of which the tire is built up, vary in the degree of their hardness, or elasticity, as they approach the tread.

The actual tread of the tire is manufactured in long lengths by means of a forcing machine; this machine is hulk on the principle of the sausage-making machine, and the rubber mixture is forced therefrom, through dies, which give the required shape to the tread. Some of the machines employed for this purpose are shown in the illustration in the centre of this page. These machines are also employed For the manufacture of carriage tires, which are made of one grade of rubber throughout, instead of being laminated in various grades : the unvulcanised rubber mixture is delivered from the machine in long strips, of the required profile, and these strips are then cut up into suitable lengths for tires of different diameters. The ends are then " scarfed " and joined together by a rubber flux, and the whole is vulcanised in a mould, making an annular tire.

In building up the solid-rubber motor tire, each grade of rubber is super-imposed, one on the other, under great pressure, while in an unvulcanised state, until the required number of layers has been employed. The condition of the mass is now an annular band of rubber of various grades super-imposed on each other—the hardest at the base, and graduated to the softest on

the tread—built upon an nextensible steel hand, having dovetailed grooves on the outer surface, into which the hard rubber, or vulcanite, may be " keyed." The shape of this band is approximate to the finished .tire, and it is next placed inside a metal mould., of accurate dimensions and shape, and under great pressure it is then vulvanised in the pans illustrated on the

previous page. After it is removed from the mould, there are " fins " of rubber on the surface, which show the parting of the vulcanising mould; these are ground off by means of emery wheels, and the surface of the tire is left perfectly smooth. An illustration on the precedingpage shows a view of the room in which this operation is carried out. So far as we are aware, this i company is the only one which treats its tires in this manner.

The tire is now ready for fitting to the wheel, accurate in size, and corresponding with the table of dimensions set out in the catalogue of the Prowodnik Company.

The plant employed by the company has a capacity of 300 finished tires per day,and we are informed that it is prepared to manufacture tires of special construction for anybody having ideas of tire design differing from those at present on the market.

The management of the motor tire department in this countryand the colonies is in the hands a Mr. F. J. J. Glynn, and his long experience in the tire trade should be of service to all who require information or advice.