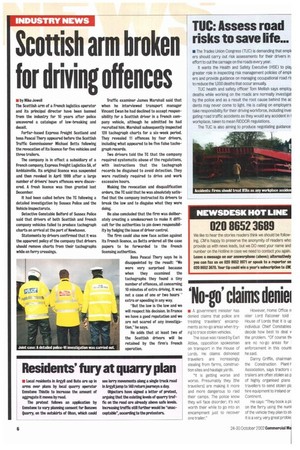 Page 6, 24th October 2002 — Scottish arm broken for driving offences
Close
Noticed an error?
If you've noticed an error in this article please click here to report it so we can fix it.
Keywords : Tachograph

• by Mike Jewell The Scottish arm of a French logistics operator and its principal director have been banned from the industry for 10 years after police uncovered a catalogue of law-breaking and deceit Forfar-based Express Freight Scotland and boss Pascal Thery appeared before the Scottish Traffic Commissioner Michael Betts following the revocation of its licence for five vehicles and three trailers.

The company is in effect a subsidiary of a French company. Express Freight Logistics SA. of Amblainville. Its original licence was suspended and then revoked in April 1999 after a large number of drivers hours offences were discovered. A fresh licence was then granted last December.

It had been called before the TC following a detailed investigation by Sussex Police and the Vehicle Inspectorate.

Detective Constable Belford of Sussex Police said that drivers of both Scottish and French company vehicles failed to produce tachograph charts on arrival at the port of Newhaven.

Statements by drivers confirmed that it was the apparent policy of the company that drivers should remove charts from their tachographs while on ferry crossings. Traffic examiner James Marshall said that when he interviewed transport manager Vincent Ewan he had declined to accept responsibility for a Scottish driver in a French company vehicle, although he admitted he had recruited him. Marshall subsequently inspected 128 tachograph charts for a six-week period. They revealed 11 offences by four drivers, including what appeared to be five false tachograph records, Two drivers told the IC that the company required systematic abuse of the regulations, with instructions that the tachograph records be disguised to avoid detection. They were routinely required to drive and work excessive hours.

Making the revocation and disqualification orders. the IC said that he was absolutely satisfied that the company instructed its drivers to break the law and to disguise what they were doing.

He also concluded that the firm was deliberately creating a smokescreen to make it difficult for the authorities to pin down responsibility by fudging the issue of driver control.

The firm could also now face action against its French licence. as Betts ordered all the case papers to be forwarded to the French licensing authorities.

Boss Pascal Thery says he is disappointed by the result: "We were very surprised because when they examined the tachographs they found a tiny number of offences. all concerning 10 minutes of extra driving, It was not a case of one or two hours.' extra or speeding in any way.

"But the law is the law and we will respect his decision. In France we have a good reputation and we are not scared of any investigation." he says.

He adds that at least two of the Scottish drivers will be retained by the firm's French operation.