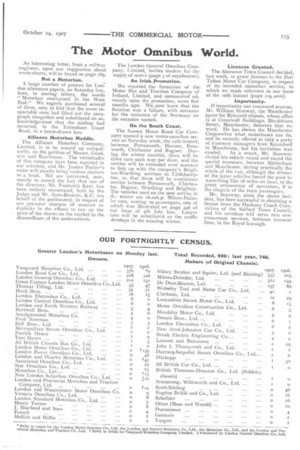 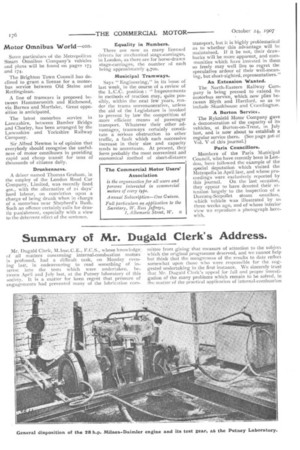 Page 7, 24th October 1907 — The Motor Omnibus World.
Close
Noticed an error?
If you've noticed an error in this article please click here to report it so we can fix it.
Keywords : Worthing, Tram

An interesting letter, from a railway engineer, upon our suggestion about route-charts, will be found on page 189.

A large number of posters for London afternoon papers, on Saturday last, bore, in staring letters, the words " Motorbus overturned in. the West End." We eagerly purchased several of these, only to find that the more respectable ones had lifted out the paragraph altogether and substituted-an acknowledgement that the mishap had occurred, in the Tottenham Court Road, to a horse-drawn bus.

The Alliance Motorbus Company, Limited, is to be wound up compulsorily, on the petition of Messrs. Good_ win and Rawlinson. The vicissitudes of this company have been reported in our columns, and Mr. Justice Parker's order will shortly bring various matters to a head. We are interested, now, merely to record the fact that one of the directors, Mr. Frederick Kerr, has been entirely exonerated, both by the Judge and Mr. Gore-Browne, K.C. (on behalf of the petitioners), in respect of any personal charges of concern or duplicity in the efforts to run up the price of the shares on the market to the discomfiture of the underwriters. " The London General Omnibus Company, Limited, invites tenders for the supply of stores (page 3 of supplement). An Irish Promotion.

We reported the formation of the Motor Bus And Traction Company of Ireland, Limited, and commented adversely upon the promotion, some few months ago. We„now learn that the flotation was a failure, with accounts for the reticence of the Secretary on the occasion named.

On the South Coast.

The Sussex. Motor Road Car Company opened -a. new motor-omnibus service on Saturday .tveek„ the 12th instant, between Portsmouth,' Havant, Emsworth, Chichester and Bognor. During the winter months, there will be three cars each way per diem, and the service will be extended next summer to link up with the company's Brighton-Worthing services to Littleharnpton, so that there will be continuous service between Portsmouth, Chichester, Bognor, Worthing and Brighton. The vehicles used on the new service in tho winter are 16-2oh.p. Milnes-Daimler cars, seating 20 passengers, one of which was illustrated on page 446 of our issue of 4th July last. Larger cars will be substituted as the traffic develops in the ensuing winter. Licences Granted.

The Aberavon Town Council decided, last week, to grant licenses tothe Port Talbot Motor Car Company, in respect of its.. intended motorbus service, to which we made reference in our issue of the loth instant (page p9„ante).

If importunity can command success, Mr. William Stanway, the Manchester agent for Ryknield chassis, whose officeis at Cromwell Buildings, Blackfriars Street, Manchester, deserves that reward. He has shown the Manchester Corporation what motorbuses can do, and he recently offered to. take a party of tramway managers from Knutsford to Manchester, but his invitation was evaded. As a result, Mr. Stanway circled his vehicleround and round the special tramears, between Altrincham and Manchester, during practically the whole of the run, although the drivers of the latter vehicles forced the pace tO something like 18 miles an hour, to the great amusement of spectators, if to the chagrin of the tram passengers. Mr. Stanway, since the above incident, has been successful in obtaining a license from the Hackney Coach Committee of the Salford Town Council, and his omnibus will serve two new cross-route services, between tramcar lines, in the Royal borough. Some particulars of the Metropolitan Steam Omnibus Company's vehicles and plans will be found on pages 573 and 174.

The Brighton Town Council has declined to grant a license for a motorbus service between Old Steine and Rottingdean.

A line of tramcars is proposed between Hammersmith and Richmond, via Barnes and Mortlake. Great opposition is anticipated.

The latest motorbus service in Lancashire, between Barnber Bridge and Charley, has been arranged by the Lancashire and Yorkshire Railway Company.

Sir Alfred Newton is of opinion that everybody should recognise the usefulness of motor omnibuses in providing rapid and cheap transit for tens of thousands of citizens daily.

A driver named Thomas Graham, in the employ of the London Road Car Company, Limited, was recently fined 40s., with the alternative of 21 days' hard labour, on conviction upon a charge of being drunk when in charge of a motorbus near Shepherd's Bush. Such an offence certainly calls for drastic punishment, especially with a view to the deterrent effect of the sentence.

Says " Engineering," in its issue of last week, in the course of a review of the L.C.C. position : Improvements in methods of traction may, quite possibly, within the next few years, render the trams unremunerative, unless the aid of the Legislature is invoked to prevent by law the competition of more " efficient means of passenger transport. Whatever their other advantages; tramways certainly constitute a serious obstruction to other traffic, . a fault which each successive increase in their size and capacity tends to accentuate. At present, they form probably the most convenient and economical method of short-distance transport, but it is highly problematical as to whether this advantage will be maintained. If it be not, their drawbacks will be more apparent, and communities which have invested in them so freely may well live to regret the speculative ardour of their well-meaning, but short-sighted, representatives."

The North-Eastern Railway Company is being pressed to extend its motorbus service, which now plies between Blyth and Hartford, so as to include Shankhouse and Cranalington.

The Ryknield Motor Company gave a demonstration of the capacity of its vehicles, at Burton-on-Trent, in July last, and is now about to establish a regular service there. (See page sob of Vol. V of this journal.) Paris Councillors.

Members of the 'Paris Municipal Council, who have recently been is London, have followed the example of the special deputation which visited the Metropolis in April last, and whose proceedings were exclusively reported by this journal. On the last occasion, they appear to have devoted their attention largely to the inspection of a Darracq-Serpollet steam omnibus, which vehicle was illustrated by us three weeks ago, and of whose interior view we reproduce a photograph herewith.