The Glasgow Meet and Parade. 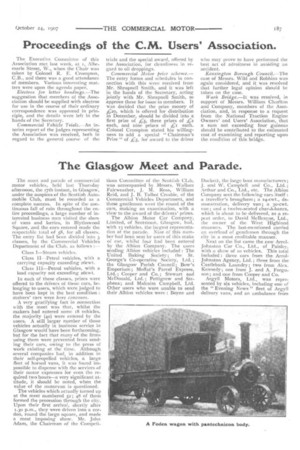 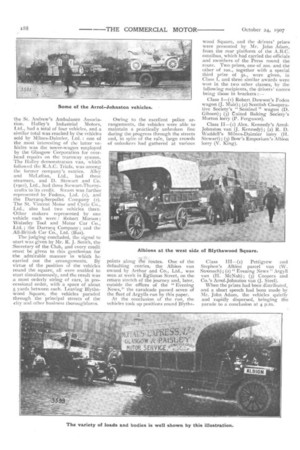 Page 19, 24th October 1907 — The Glasgow Meet and Parade.
Close
Noticed an error?
If you've noticed an error in this article please click here to report it so we can fix it.
Keywords : Leyland Motors, Albion Motors, Argyll

The meet and parade of commercial motor vehicles, held last Thursday afternoon, the 17th instant, in Glasgow, under the auspices of the Scottish Automobile Club, must be recorded as a complete success. In spite of the continuous fall of rain throughout the entire proceedings, a large number of interested business men visited the show of vans and lorries, in Blythswood Square, and the cars entered made the respectable total of 58, for all classes. The entry list had been divided into 3 classes, by the Commercial Vehicles Department of the Club, as follows :— Class I—Steam vehicles.

Class III—Petrol vehicles, with a load capacity not exceeding 26cwt.

In each of these classes, prizes were offered to the drivers of those cars, belonging to users, which were judged to have been kept in the best condition : makers' cars were hors con cowl's.

A very gratifying fact in connection with the meet was that, whilst the makers had entered some i8 vehicles, the majority (40) were entered by the users. A still larger number of those vehicles actually in business service in Glasgow would have been forthcoming, but for the fact that many of the firms using them were prevented from sending their cars, owing to the press of work existing at the time. Although several companies had, in addition to their self-propelled vehicles, a large fleet of horsed vans, it was found impossible to dispense with the services of their motor expresses for even the required two hours—a very significant attitude, it should be noted, when the value of the rnotorvan is questioned.

The vehicles which actually turned up at the meet numbered 52; 48 of them formed the procession through the city. Upon their first arrival, shortly after 1.30 p.m., they were driven into a cordon, round the large square, and made a most imposing show. Mr. John Adam, the Chairman of the Competi

tions Committee of the Scottish was accompanied by Messrs. Wallace Fairweather, J. M. Ross, William Reid, and J. B. Talbot Crosbie, of the Commercial Vehicles Department, and these gentlemen went the round of the cars, making an examination, with a view to the award of the drivers' prizes.

The Albion Motor Car Company, Limited, of Scotstoun, Glasgow, had, with 13 vehicles, the largest representation at the parade. Nine of this number had been sent by users of this make of car, whilst four had been entered by the Albion Company. The users sending Albion vehicles included : The United Baking Society ; the St. George's Co-operative Society, Ltd. ; the Glasgow Parish Council ; Bow's Emporium; Moffat's Parcel Express, Ltd.; Cooper and Co.; Stewart and McDonald, Ltd.; Pettigrew and Stephens; and Malcolm Campbell, Ltd. Other users who were unable to send their Albion vehicles were : Boyne and

Duckett, the large boot manufacturers ; J. and W. Campbell and Co., Ltd. ; Arthur and Co., Ltd., etc. The Albion Company sent the following cars itself : a traveller's brougham; a 24-cwt., demonstration, delivery van ; a 3o-cwt. van ; and a twelve-seated char-à-bancs, which is about to be delivered, as a repeat order, to David McBrayne, Ltd., the owner of the West Highland steamers. The last-mentioned carried an overload of gentlemen through the City in a most creditable manner.

Next on the list came the new ArrolJohnston Car Co., Ltd., of Paisley, with a show of to vehicles. This total included : three cars from the ArrolJohnston Agency, Ltd.; three from the Castlebank Laundry; two from Alex. Kennedy; one from J. and A. Ferguson; and one from Cooper and Co.

Argyll Motors, Ltd., was represented by six vehicles, including one of the "Evening News" fleet of Argyll delivery vans, and an ambulance from The St. Andrew's Ambulance Associa tion. Halley 's Industrial Motors, Ltd., had a total of four vehicles, and a similar total was reached by the vehicles sold by Milnes-Daimler, Ltd. : one of the most 'interesting of the latter vehicles was the tower-wagon employed by the Glasgow Corporation for overhead repairs on the tramway system, The Halley demonstration van, which followed the R.A.C. Trials, was among the former company's entries. Alley and McLellan, Ltd., had three steamers, and D. Stewart and Co. (1902), Ltd., had three Stewart-Thornycrofts to its credit. Steam was further represented by Fodens, Ltd. (t), and the Darracq-Serpollet Company (2). The St. Vincent Motor and Cycle Co., Ltd., also had two vehicles there. Other makers represented by one 'vehicle each were : Robert Morton ; Wolseley Tool and Motor Car Co., Ltd. ; the Darracq Company ; and the All-British Car Co., Ltd. (Bus).

The judging concluded, the signal to -start was given by Mr, R. J. Smith, the Secretary of the Club, and every credit 'must be given to this gentleman for the admirable manner in which he carried out the arrangements. By virtue of the position of the vehicles round the square, all were enabled to start simultaneously, and the result was a most orderly string of cars, in processional order, with a space of about 5 yards between each. Leaving Blythswood Square, the vehicles paraded through the principal streets of the city and other business thoroughfares.

Owing to the excellent police arrangements, the vehicles were able to maintain a practically unbroken line during the progress through the streets and, in spite of the rain, large crowds of onlookers had gathered at various points along the routes. One of the defaulting entries, the Albion van owned by Arthur and Co., Ltd., was seen at work in Eglinton Street, on the return stretch of the journey and, later, outside the offices of the "Evening News," the cavalcade passed seven of the fleet of Argylls run by this paper.

At the conclusion of the run, the vehicles took up positions round Blyths wood Square, and the drivers' prizes were presented by Mr. John Adam, from the rear platform of the A.B.C. omnibus, which had carried the officials and members of the Press round the route. Two prizes, one of 20s. and the other of Jos., together with a special third prize of as., were given, in Class 1, and three similar awards were won in the two other classes, by the following recipients, the drivers' names being those in brackets Class I—(t) Robert Dawson's Foden wagon (J. Muir); (2) Scottish Co-operative Society's " Sentinel " wagon (D. Gibson); (3) tinited Baking Society's Morton lorry (P. Ferguson).

When the prizes had been distributed, and a short speech had been made by Mr. John Adam, the vehicles quietly and rapidly dispersed, bringing the parade to a conclusion at 4 p.m.