The advantages of demountables 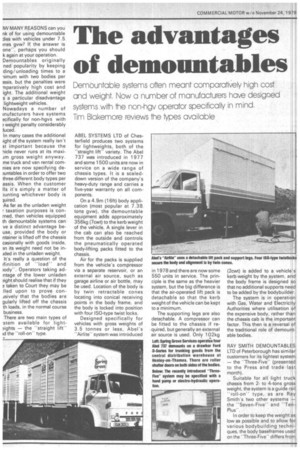 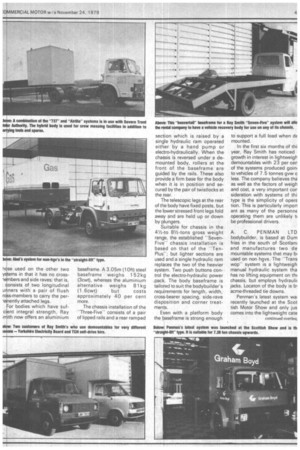 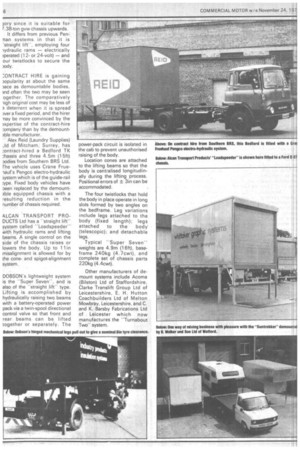 Page 46, 24th November 1979 — The advantages of demountables
Close
Noticed an error?
If you've noticed an error in this article please click here to report it so we can fix it.
Keywords : Ancient Greek Technology, Cranes, Truck, Chassis

AN MANY REASONS can you nk of for using demountable lies with vehicles under 7.5 Ines gvw? If the answer is one", perhaps you should k again at your operation. Dernountables originally ned popularity by keeping ding/unloading times to a nimum with two bodies per issis, but the penalties were 'operatively high cost and ight. The additional weight s a particular disadvantage lightweight vehicles.

In many cases the additional ight of the system really isn't 3t important because the nicle never runs at its maxiim gross weight anyway. me truck and van rental cornflies are now specifying denintables in order to offer two three different body types per assis. When the customer Ils it's simply a matter of )unting whichever body is wired.

As far as the unladen weight taxation purposes is conrned, then vehicles equipped th demountable systems can ye a distinct advantage beuse, provided the body or ntainer is lifted off the chassis casionally with goods inside, ?,n its weight need not be inWed in the unladen weight. It's really a question of the finition of "load" and )ody". Operators taking adntage of the lower unladen ?.ight should realise that if they ?. taken to Court they may be Iled upon to prove conJsively that the bodies are gularly lifted off the chassis th loads, in the normal course business.

There are two main types of

ABEL SYSTEMS LTD of Chesterfield produces two systems for lightweights, both of the "straight lift" variety. The Abel 737 was introduced in 1977 and some 1500 units are now in service on a wide range of chassis types. It is a scaleddown version of the company's heavy-duty range and carries a five-year warranty on all components.

On a 4.9m (16ft) body application (most popular at 7.38. tons gvw), the demountable equipment adds approximately 355kg (7cwt) to the kerb weight of the vehicle. A single lever in the cab can also be reached from the outside and controls the pneumatically operated body-lifting packs fitted to the chassis.

Air for the packs is supplied from the vehicle's compressor via a separate reservoir, or an external air source, such as garage airline or air bottle, May be used. Location of the body is by twin retractable cones locating into conical receiving points in the body frame, and the body is locked into position with four ISO-type twist locks.

Designed specifically for vehicles with gross weights of 3.5 tonnes or less, Abel's "Airlite'' system was introduced in 1978 and there are now some 550 units in service. The principle is the same as the heavier system, but the big difference is that the air-operated lift pack is detachable so that the kerb weight of the vehicle can be kept to a minimum.

The supporting legs are also detachable. A compressor can be fitted to the chassis if required, but generally an external air source is used. Only 1 02kg Lett: Spring Grove Services operates four Abel 737 demounts on a drawbar Ford L 0-Series for trunking goods from the central distribution warehouse at Henley-on-Thames. There are roller shutter doors on both sides of the bodies. Below: The recently introduced "ThreeFive" system may be specified with a hand pump or electro-hydraulic operation. (2cwt) is added to a vehicle's kerb weight by the system, and the body frame is designed so that no additional supports need to be added by the bodybuilder.

The system is in operation with Gas, Water and Electricity Authorities where utilisation of the expensive body, rather than the chassis cab is the important factor. This then is a reversal of the traditional role of demountable bodies.

RAY SMITH DEMOUNTABLES LTD of Peterborough has similar customers for its lightest system — the "Three-Five" (presented to the Press and trade last month).

Suitable for all light truck chassis from 2to 4-tons gross weight, the system is a guide rail "roll-on" type, as are Ray Smith's two other systems — the "Seven-Five" and "TenPlus".

In order to keep the weight as low as possible and to allow for various bodybuilding techniques, the body baseframes used on the ''Three-Five" differs from

h se used on the other two y ems in that it has no cross1 mbers and side raves; that is, . qonsists of two longitudinal unners with a pair of flush robs-members to carry the per

section which is raised by a single hydraulic ram operated either by a hand pump or electro-hydraulically. When the chassis is reversed under a demounted body, rollers at the front of the baseframe are guided by the rails. These also provide a firm base for the body when it is in position and secured by the pair of twistlocks at the rear.

The telescopic legs at the rear of the body have fixed posts, but the lower stressed front legs fold away and are held up or down by plungers.

Suitable for chassis in the 41/2-to 81/2-tons gross weight range, the established "SevenFive" chassis installation is based on that of the "TenPlus"; but lighter sections are used and a single hydraulic ram replaces the two of the heavier system. Two push buttons control the electro-hydraulic power .pack. The body baseframe is tailored to suit the bodybuilder's requirements for length, width, cross-bearer spacing, side-rave disposition and corner treatments.

Even with a platform body the baseframe is strong enough to support a full load when dE mounted.

In the first six months of thi year, Ray Smith has noticed growth in interest in lightweigh demountables with 23 per cer of the systems produced goin! to vehicles of 7.5 tonnes gvw o less. The company believes tha as well as the factors of weigh and cost, a very important cor sideration with systems of thi type is the simplicity of opera tion. This is particularly imporl ant as many of the personnE operating them are unlikely ti be professional drivers.

A. C. PENMAN LTD bodybuilder, is based at Dum fries in the south of Scotian( and manufactures two de mountable systems that may bi used on non hgvs. The "Trans wop" system is a lightweigh manual hydraulic system tha has no lifting equipment on thi chassis, but employs hydraulii jacks. Locaton of the body is b, acme-threaded tie downs.

Penman's latest system wa recently launched at the Scot tish Motor Show and only jus comes into the lightweight cate jory since it is suitable for 7.38-ton gvw chassis upwards.

It differs from previous Pen nan systems in that it is 'straight lift", employing four iydraulic rams — electrically operated (12or 24-volt) — and our twistlocks to secure the )ody.

-;ONTRACT HIRE is gaining )opularity at about the same )ace as demountable bodies, Ind often the two may be seen ogether. The comparatively igh original cost may be less of 3 deterrent when it is spread wer a fixed period, and the hirer -nay be more convinced by the axpertise of the contract-hire 3ompany than by the demountable manufacturer.

• Alex Reid (Laundry Supplies) _td of Mitcham, Surrey, has ontract-hired a Bedford TK 3hassis and three 4.5m (15ft) Dodies from Southern BRS Ltd. The vehicle uses Crane Fruelauf's Pengco electro-hydraulic 3ystem which is of the guide-rail type. Fixed body vehicles have peen replaced by the demountable equipped chassis with a resulting reduction in the number of chassis required.

ALCAN TRANSPORT PRODUCTS Ltd has a "'straight lift'' system called Loadspeeder" with hydraulic rams and lifting beams. A single control on the side of the chassis raises or lowers the body. Up to 11 in misalignment is allowed for by the coneand spigot-alignment system.

DOBSON's lightweight system is the "Super Seven-, and is also of the "'straight lift"' type. Lifting is accomplished by hydraulically raising two beams with a battery-operated power pack via a twin-spool directional control valve so that front and rear beams can be lifted together or separately. The

power-pack circuit is isolated in the cab to prevent unauthorised raising of the body.

Location cones are attached to the lifting beams so that the body is centi'alised longitudinally during the lifting process. Positional errors of ± 3in can be accommodated.