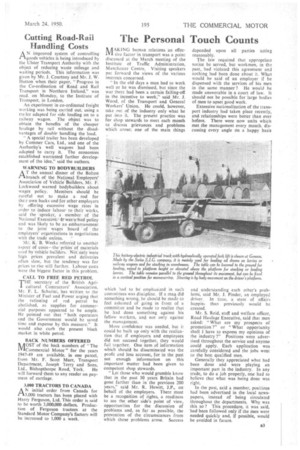 AN improved system of controlling goods vehicles is being introduced by the Ulster Transport Authority with the object of reducing waste mileage and waiting periods. This information was given by Mr. J. Courtney and Mr. J. W. Hutton when their paper, " Progress in the Co-ordination of Road and Rail Transport in Northern Ireland," was read. on Monday, to the Institute of Transport, in London.

An experiment in co-ordinated freight working was being carried out, using a trailer adapted for side loading on to a railway wagon. The object was to obtain the benefits of the cheaper haulage by rail without the disadvantages of double handling the load.

A special trailer has been developed by Commer Cars, Ltd., and one of the Authority's well wagons had been adapted to carry it. The economies established warranted further development of the idea," said the authors.

AT the annual dinner of the Bolton branch of the National Employers' Association of Vehicle Builders, Mr. F. Lockwood warned bodybuilders about wages policy. Members should be careful not to make a rod for their own backs and for other employers by offering excessive wage rates in order to induce • labour to their works, said the speaker, a member of the National Executive,' ir was a•bad policy and was likely to be an embarrassment to the joint wages board " of the employers' organizations in negotiations

with the trade unions. '

Mr: It B. Weeks referred to another aspect of costs —the prices" of materials used by Vehicle builders. blot only were high prices prevalent and deliveries often slow, but the tendency was for prices to rise still further. Labour costs were the biggest factor in this problem.

CALL TO FREE RED PETROL 'THE secretary of the British Agri' cultural Contractors' Association, Mr. F. L. Sabatini, has written to the Minister of Fuel and Power urging that the rationing of red petrol be abolished, as supplies for commercial purposes appeared to be ample. He pointed out that "both operators and the Government would be saved time and expense by this measure." It would also curb the present black market in white petrol.

BACK NUMBERS OFFERED VIOST of the back numbers of "The 1VICommercial Motor" for the years 1947-49 are available, in one parcel, from Mr. F. Scott Marr, Transport Department, Joseph Terry and Sons, Ltd., Bishopthorpe Road. York. He will forward them to any reader on payment of carriage.

AN initial order from Canada for 3,000 tractors has been placed with Harry Ferguson, Ltd. This order is said to be worth 3,000,000 dollars. Production of Ferguson tractors at the Standard Motor Company's factory will be increased to 1,000 a week.