"Jam is Thicker for Hebble 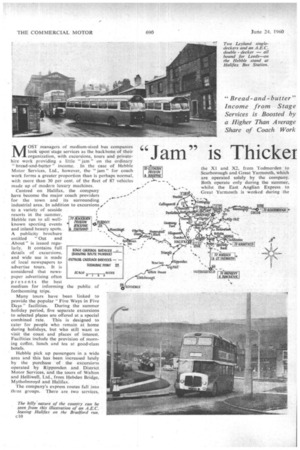 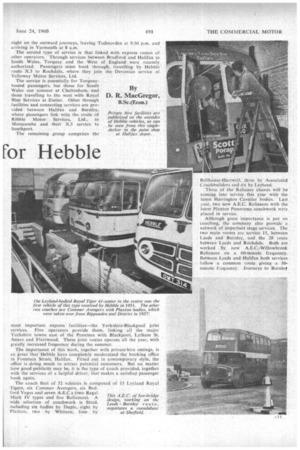 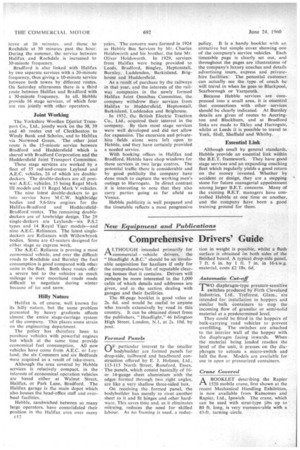 MOST managers of medium-sized bus companies look upon stage services as the backbone of their organization, with excursions, tours and privatehire work providing a little " jam " on the ordinary " bread-and-butter" income. In the case of Hebble 4 Motor Services, Ltd., however, the " jam " for coach [TO etlIRCROE 1

Centred on Halifax, the company e

for the town and its surrounding , industrial area. In addition to excursions/ to a variety of seaside , i

resorts in the summer, Hebble run to all wellknown sporting events and inland beauty spots. A publicity brochure entitled "Out and About" is issued regularly. It contains full details of excursions, and wide use is made of local newspapers to advertise tours. It is considered that newspaper advertising often presents the best medium for informing the public of forthcoming trips.

Many tours have been linked to provide the popular "Five Ways in Five Days facilities. During the summer holiday period, five separate excursions to selected places are offered at a special combined rate. This is designed to cater for people who remain at home during holidays, but who still want to visit the coast and places of interest. Facilities include the provision of morning coffee, lunch and tea at good-class hotels.

Hebble pick up passengers in a wide area and this has been increased lately by the purchase of the excursions operated by Ripponden and District Motor Services, and the tours of Walton and Helliwell, Ltd., from Hebden Bridge, Mytholmroyd and Halifax.

The company's express routes fall into three groups. There are two services,

night on the outward journeys, leaving Todmorden at 9:30 p.m. and arriving in Yarmouth at 8 a.m.

The second type of service is that linked with express routes of other operators. Through services between Bradford and Halifax to South Wales, Torquay and the West of England were recently authorized. Passengers must book through, travelling by Hebblc route X.3 to Rochdale, where they join the Devonian service of Yeiloway Motor Services, Ltd.

The service is essentially for Torquaybound passengers, but those for South Wales can connect at Cheltenham, and those travelling to the west with Royal Blue Services at Exeter. Other through facilities and connecting services are provided between Halifax and Burnley, where passengers link with the route of Ribble Motor Services, Ltd., to Morecambe and their X.5 service to Sou thport.

The remaining group comprises the most important express facilities—the Yorkshire-Blackpool joint services. Five operators provide them, linking all the major Yorkshire towns east of the Pennines with Blackpool, Lytham St. Armes and Fleetwood. These joint routes operate all the year, with greatly increased frequency during the summer.

The importance of this work, together with private-hire outings, is so great that Hebble have completely modernized the booking office in Fountain Street, Halifax. Fitted out in contemporary style, the office is doing much to attract potential customers. But no matter how good•publicity may be, it is the type of coach provided, together with the services of a helpful driver, that makes a satisfied passenger book again.

Three of the Reliance chassis will be coming into service this year with the latest Harrington Cavalier bodies. Last year, two new A.E.C. Reliances with the latest Plaxton Panorama coachwork were placed in service.

Bradford is also linked with Halifax by two separate services with a 20-minute frequency, thus giving a ID-minute service between both towns by different routes. On Saturday afternoons there is a third route between Halifax and Bradford with a 30-minute frequency. In all, Hebble provide 16 stage services, of which four are run jointly with other operators.

The Yorkshire Woollen District Transport Co., Ltd., jointly work on the 38, 39 and 40 routes out of Cieckheaton to Windy Bank and Scholes, and to Halifax via Norwood Green. The other joint route is the 15-minute service between Bradford and Huddersfield which is shared with Bradford Corporation and the Huddersfield Joint Transport Committee.

These stage services are worked by a fleet of 55 red-and-cream Leyland and AEC vehicles, 26 of which are doubledeckers. The double-deckers are all postwar A.E.C. vehicles, 15 being Regal Mark HI models and II Regal Mark V vehicles.

The nine latest double-deckers to go into service have M.C.W. highbridge bodies and 9.6-litre engines for the Halifax-Bradford and HuddersfieldBradford routes. The remaining doubledeckers are of lowbridge design. The 29 single-deckers are Leylands—six P.S.2 types and 14 Royal Tiger models—and nine A.E.C. Reliances. The latest singledeckers are Reliances with Willowbrook bodies. Some are 43-seaters designed for either stage or express work.

The A.E.C. Reliance is proving a most economical vehicle, and over the difficult roads to Rochdale and Burnley the fuel consumption is gOod compared with other units in the fleet. Both these routes offer a severe test to the vehicles as much mileage is over moorland roads made difficult to negotiate during winter because of ice and snow.

Halifax is, of course, well known for its hilly nature, but the same problem presented by heavy gradients affects almost the entire stage-carriage system of the company. This places some strain on the engineering department.

The policy has therefore been to purchase vehicles with powerful engines but which at the same time provide economical fuel consumption. All new vehicles have come from A.E.C. or Leyland; the six Commers and six.Bedfords were acquired. as a result of take-overs.

Although the area covered by Hebble services is relatively compact, in the interests of economical operation vehicles are based either at Walnut Street, Halifax, or Park Lane, Bradford. The Halifax garage is the main depot which also houses the head-office staff and overhaul facilities.

Hebble, sandwiched between so many large operators, have consolidated their position in the Halifax area over many c12 years. The concern were ,formed in 1924 as Hebble Bus Services by Mr. Charles Holdsworth and his brother, the late Mr. Oliver Holdsvvorth. In 1929, services from Halifax were being provided to Leeds, Bradford, Bingley, Heptonstall, Burnley, Luddenden, Barkisland, Brighouse and Huddersfield.

As a result of purchase by the railways in that year, and the interests of the railway companies in the newly formed Halifax Joint Omnibus Committee, the company withdrew their services from Halifax to Huddersfield, Beptonstall, Barkisland, Luddenden and Brighouse. . In 1932, the British Electric Traction Co., Ltd., acquired their interest in the company. By then most stage services were well developed and did not allow for expansion. The excursion and privatehire fields alone were left open to Hebble, and they have certainly provided a needed service.

With booking offices in Halifax and Bradford, Hebble have shop windows for these services in two large centres. The potential traffic there is considerable and by good publicity the company have done much to capture the working men's outings to Harrogate. In direct contrast it is interesting to note that they also carry parties going as far afield as Venice.

Hebble publicity is well prepared and the timetable reflects a most progressive policy. It is a handy booklet with an attractive but simple cover showing one of the company's service vehicles. Each timetable page is clearly set out, and throughout the pages are illustrations of the company's luxury coaches and details advertising tours, express and privatehire facilities: The potential customer can actually see the type of coach he will traVel in when he goes to Blackpool, Scarborough or Yarmouth.

Because Hebble services are cornpressed into a small area, it is essential that connections with other services should be clearly indicated. At Burnley details are given of routes to Accrington and Blackburn, and at Bradford links are made to Ilkley and Harrogate, whilst at Leeds it is possible to travel to York, HUH; Sheffield and Whitby.

Although small by general standards, Hebble provide an essential link within the B.E.T. framework. They have good stage services and an expanding coaching fleet which regularly yields a good return on the money invested. Whether by accident or design, they are a stepping stone for future managerial appointment among larger B.E.T. concerns. Many of the existing B.E.T. managers have controlled Hebble at one time or another, and the company have been a good training ground for them.