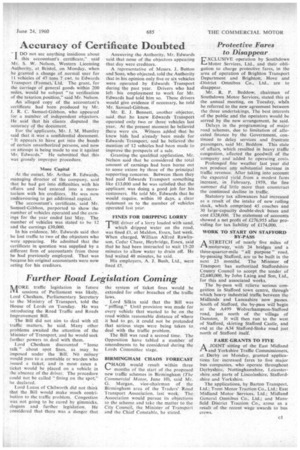 EXCLUS1VE operation by Southdown 1—d Motor Services. Ltd., and their obligation to charge protective fares, in the area of operation of Brighton Transport Department and Brighton, Hove and -District Omnibus Co., Ltd., are to disappear.

Mr. R. P. Beddow, chairman of Southdown Motor Services, stated this at the annual meeting, on Tuesday, when he referred to the new agreement between the three undertakings. The best interests of the public and the operators would be served by the new arrangement, he said.

Delays in the programming of major road schemes, due to limitation of allocated finance by the Government, continued to delay services and frustrate passengers, said Mr. Beddow. This state of affairs, which resulted in heavy traffic congestion, affected the goodwill of the company and :added to operating costs.

Prolonged fine weather last year did not produce any substantial increase in traffic revenue. After taking into account the expected yield from a modest fares increase, in February, 1959, the fine summer did' little more than counteract the continued decline in traffic.

Statutory tax allowances had increased as a result of the intake of new rolling stock, which comprised 45 coaches and 30 large-capacity double-deck buses and cost £328,000. The statement of accounts showed a net profit of £276,955 after providing for tax liability of £174,040.

WORK TO START ON STAFFORD BY-PASS

ASTRETCH of nearly five miles of motorway, with 24 bridges and a three-quarter-mile "all purpose" road, by-passing Stafford, are to be built in the next 23 months. The Minister of Transport has authorized Staffordshire County Council to accept the tender Of £2,680,000, by John Laing and Son, Ltd., for this and associated works.

A JOINT sitting of the East Midland PA and Yorkshire Traffic Commissioners, at Derby on Monday, granted applications for increased fares to five major bus companies, who operate throughout Derbyshire, Nottinghamshire, Leicestershire and parts of Lincolnshire, Staffordshire and Yorkshire.