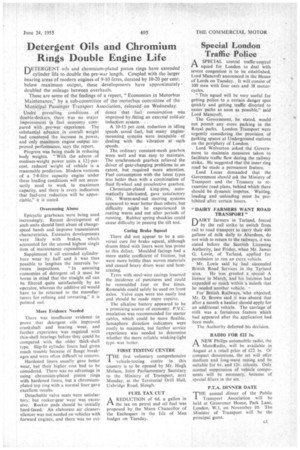 ASPECIAL central traffic-control squad for London to deal with severe congestion is to be established, Lord Mancroft announced in the House of Lords on Tuesday. It will consist of 100 men with four cars and 38 motorcycles.

" This squad will be very useful for getting police to a certain danger spot quickly and getting traffic diverted to easier paths as soon as possible," said Lord Mancroft.

The Government, he stated, would not permit any more parking in the Royal parks. London Transport were urgently considering the provision of parking spaces at Underground stations on the periphery of London.

Lord Wolverton asked the Government to maintain measures taken to facilitate traffic flow during the railway strike. He suggested that the inner ring road be made a permanent feature.

Lord Lucas demanded that the Government should ask the Ministry of Transport and the Treasury to reexamine road plans, behind which there should be dynamic impetus. Waiting, loading and unloading must be prohibited after certain hours.

by the rail strike to switch from rail to road transport to carry their 400 gallons of milk daily to Aberdeen, do not wish to return to the railways, it was stated before the Scottish Licensing Authority, last Friday, when Mr. James G. Lovie, of Tarland, applied for permission to run at extra vehicle.

Mr. Lovie said he had succeeded British Road, Services in the Tarland area. • He was granted a special A licence in March, and his business had expanded so much within a month that he needed another vehicle.

For British Railways, who objected', Mr. D. Brown said it was absurd that after a month a haulier should apply for an additional vehicle. The carriage of milk was a fortuitous feature which had appeared after the application had been made.

The Authority deferred his decision.

ANEW Philips automobile radio, the MotoRadio, will be available in August at a retail price of £22 Is. Of compact dimensions, the set will offer medium and long-wave tuning and be suitable for 6v. and 12v, ciicuits. Only normal suppression of vehicle components will be necessary, because of special filters in the set.

THE annual dinner of the Public

Transport Association will be held at Grosvenor House, Park Lane, London, W.I, on November 10. The Minister of Transport will be the principal guest.