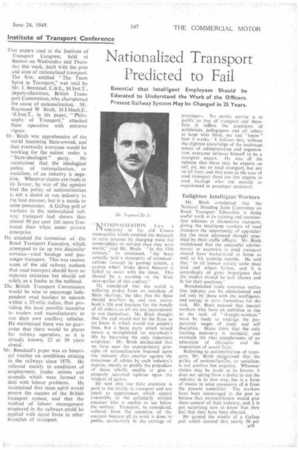 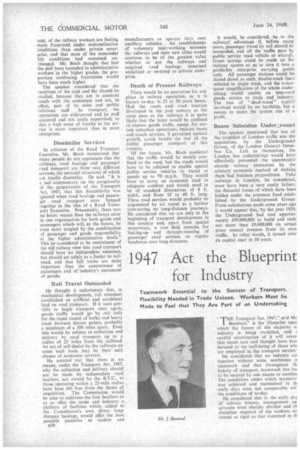 Essential that Intelligent Employees Should be Educated to Understand the Work of the Officers. Present Railway System May be Changed in 25 Years.

" M-ATiONALIZATION has a 1 similarity to the old Crown monopolies which enabled the monarch to raise revenue by charging more for commodities or services than they were worth," said Mr. Birch. "In the 17th century," he continued, "the State actually held a monopoly of communications through its posting system, a system which broke down because it failed to move with the times. This should be a warning to the State

monopolies of this century." .

He considered that the world is suffering to-day from an overdose of State ideology, the idea that the State Should interfere in, and run, everybody's life and business for the benefit of all others, as all are too incompetent to run themselves. Mr. Birch thought that the end would not be the State as' we know it, which would run people's lives, but a State party which would secure a stranglehold on everybody's life by becoming the only important employer. Mr. Birch maintained that we have seen the expropriatory prirtciple of nationalization imposed upon one industry after another against the consensus of advice by each industry's experts, merely to gratify the prejudices of those wholly unable to give a properly reasoned opinion upon the wisdom of action.

1-le said that too little attention is paid to the reality in transport and too much to appearances which appeal irresistibly to the polictially minded amateur who is unable to see below the surface. Transport, he considered, suffered from the -attention of the amateur because allits work is done in public, narticularly in the carriage of passengers. No public service is so public as that of transport and therefore it suffers the attentions of politicians, pedagogues and all others at large who think, see and "know" how it works. It follows that, without the slightest knowledge of the backstage scenes of administration and organization, everyone believes himself to be a transport expert. He was of the opinion that there may be experts on rail, air, sea or road transport; but not on all four, and that even in the case of road transport there are few experts in road haulage who are equally as experienced in passenger transport.

Enlighten Intelligent Workers Mr. Birch considered that the National Standing Joint Committee on Road Transport Education is doing useful work in its training and exariiinaLion schemes in elementary transport, giving the intelligent workers of road transport the opportunity of appreciating the more advanced thought practised by their traffic officers. Mr. Birch maintained that the successful administrator or executive in road transport should have background at home as well as his training outside. He said that " in all human society some must lead and others follow, and it is accordingly of great importance that the leaders should be well chosen and at for their positions."

Broadminded trade unionists realize that industry can he. administered and led only by those with the intelligence and energy to Min themselves for the task. Mr. Birch stressed that manual workers who have an ambition to rise to the rank of " thought-workers" must be ready to undergo the preparatory stages of study and self discipline. Many think that the only training necessary is technical, and overlook the vital complements of an education of character and the acquisition of savoir faire.

Referring to nationalization of transport, Mr. Birch maintained that the policy of nationalization, or socialism, is not positive but negative. Whatever claims may be made in its favour, it does not spring from a desire to run the industry in its best way, but is a form of mania to seize possession of it from the present controller. The workers have been encouraged in the past to believe that nationalization would give them control of their industry, and it is not surprising now to know that they feel that they have been cheated.

cent, of the railway workers are feeling more frustrated under nationalization conditions than under private enterprise, and that most of the remainder felt conditions had remained unchanged. Mr. Birch thought that had the poll been extended to administrative workers in the higher grades, the proportion confessing frustration would have been much higher.

The speaker considered that the reactions of the rank and file should be studied, because they are in constant touch with the customers and are, in effect, part of its sales and public relations staff In transport, the operations are widespread and its staff scattered and not easily supervised, so that a high sense of loyalty to the service is more important than in most enterprises.

In criticism of the Road Transport Executive, Mr. Birch maintained that many people do not appreciate that the railways, road haulage and passenger road transport are three very different services, the national structures of which are totally dissimilar. He said: "It is a sad commentary on the perspicacity of the perpetrators of the Transport Act, 1947, that this dissimilarity was ignored when road haulage and passenger road transport were lumped together in the idea of a Road Transport Executive. Presumably, there was no better reason than the railways cater in one organization for both goods and passengers which will, in the future, be even more tangled by the combination of passenger and goods responsibility at the higher administrative levels." This he considered to be reminiscent of the old railway view that road transport should have no independent existence, but should act solely as a feeder to railhead, and that full trains are mdre important than the convenience of passengers and of industry's movement of goods.

Rail Travel Outmoded He thought it unfortunate that, in mechanical development, rail transport established an artificial and accidental lead on road transport. If it were possible to begin transport once again, goods traffic would go by rail only for the rapid transit of bulky and heavy loads between distant points, probably a minimum of a 100 miles apart. Even this would be subject to collection and delivery by road transport up to a radius of 25 miles from the railhead. An act of self-denial by the railways on some such basis may be their only chance of economic survival.

He pointed out that there is no reason, under the Transport Act, 1947, why the collection and delivery should not be made by independent road hauliers, not owned by the B.T.C., as those operating within a 25-mile radius have been left free from the threat of acquisition. The Commission would be wise to cultivate the free hauliers so as to offer the trade and industry a plethora of facilities which, added to the Commission's own direct longdistance haulage, would offer the least possible incentive to traders and B20 manufacturers to operate their own ancillary vehicles. An establishment of voluntary inter-working between the railways and their new allies would continue to be of the greatest value whether or not the railways and acquired road haulage remained socialized or reverted to private enterprise.

There would be no guarantee for any place in railway operation, as it is known to-day, in 25 or 50 years hence. Had the roads and road traction developed in the past century at the same pace as the railways it is quite likely that the latter would be confined to express goods traffic, except for certain suburban operations, because buses and coach services, if permitted natural growth, could handle the rest of the public passenger transport of this country.

Of the future, Mr. Birch predicted that the traffic would be mostly confined to the road, but the roads would have to be adapted to enable special public service vehie!es to travel at speeds up to 70 m.p.h. They would have to carry an economic load in adequate comfort and would need to be of standard dimensions Of 8 ft. width, and from 35 to 40 ft. long. These road set-vices would probably be augmented by air travel as a further time-saving on long-distance journeys. He considered that we are only at the beginning of transport development in this country and, apart from special motorways, a vast field remains for linking-up and through-running of passenger road services on regular headways over long distances. It would, he considered, be to the railways' advantage if, before many years, passenger travel by rail should be outmoded, and all the traffic pass by public service road vehicle or aircraft. Great savings could be made on the railway system so as to turn it into a profitable enterprise carrying goods only. All passenger stations could be closed down as such, double-track lines reduced to single track, and the consequent simplification of the whole undertaking would enable an improved goods service to trade and industry. The loss of " dead-wood " capital involved would be no hardship, but a means to make the system run at a profit.

The speaker mentioned that one of the tragedies of London traffic was the acquisition, by the Underground Group, of the London General Omnibus Co. Left to themselves, the London bus undertakings would have effectively prevented the uneconomic electric railway extensions by the salutary economic method of making them bad business propositions. Tube railways in London, he considered, must have been ,a very costly failure. the financial losses of which have been hidden under the common fund established by the Underground Group. From calculations made some years ago it would appear that, 'by the year 1939, the Underground had cost approximately £90,000,000 to build and took not more than £9,000,000 on actual gross annual revenue from its own traffic. In other words, it turned over its capital once in 10 years.